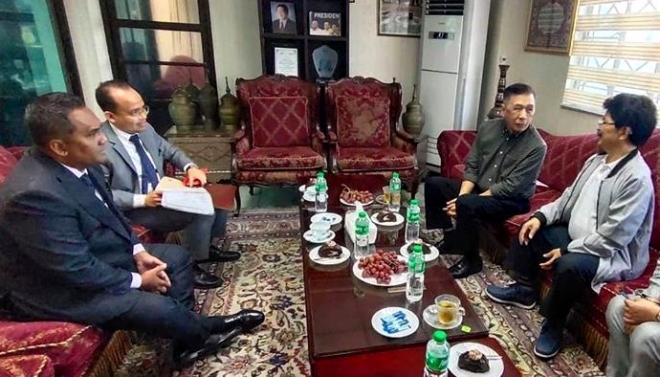 COTABATO CITY – A Malaysian foundation has offered to sponsor indigent senior Muslim Filipino citizens to go an all expenses-paid hajj or Islamic pilgrimage in Saudi Arabia this year, the National Commission on Muslim Filipinos (NCMF) said.

Host NCMF Secretary Saidamen Pangarungan received at his office in Quezon City the visiting envoy and party, and welcomed the offer as an added opportunity for indigent Muslim Filipinos to perform free hajj, Datu Ramos said.

The NCMF earlier announced that President Duterte increased the Palace annual aid for hajj from P10-million to P15-million this year to sponsor 200 indigent Filipino pilgrims in a two-week sojourn in Saudi Arabia.

Hajj performance is required for physically and financially capable Muslims at least once in lifetime as one of the five pillars of Islam. It now costs some P200,000 worth of round-trip plane fares, meals, hotel billeting, and local transport bills in Saudi Arabia for each regular Filipino pilgrim, according to NCMF estimates.

Datu Ramos said last week’s discussion between Pangarungan and Ambassador Muhammad did set a ceiling in the number of sponsored hajj slots that will be bankrolled by the Albukhary Foundation, a Malaysian humanitarian entity.

He said the foundation will be requiring each applicant or nominee to the sponsored hajj slots to be 60 years old and above, physically fit, indigent, first-time pilgrim, and in possession of basic requirements including valid passport.

The sponsor is giving preference to imams in any Philippine-based mosque, Datu Ramos said, adding that details on application process “will be released at a later date.”

Just like the 200 Presidential hajj slots, the NCMF central office and its field outfits will conduct the screening processes for the Malaysian sponsorship, facilitating officials said.

Pangarungan earlier assured that the 200 Palace hajj slots would be proportionately distributed to all regions in the country with known Muslim communities. This year’s hajj season will start in the later part of July, it was learned.

Muhammad was accompanied in his last week’s visit by his first Secretary and head of Chancery Mohd Ridzwan Shahabudin, Datu Ramos said.