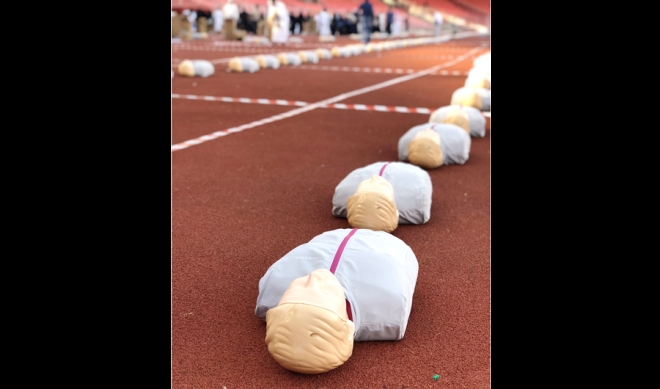 MAKKAH: Organizational problems prevented the Kingdom from succeeding in a Guinness World Records attempt at the largest Cardiopulmonary Resuscitation (CPR) training session at one time and in one place.

The number of trainees registered for the record attempt, held at King Abdul Aziz Sports City in Makkah, exceeded 16,000.

However, government authorities — including the Ministry of Health, the Saudi Heart Association, the Red Crescent, the Ministry of Education, the General Syndicate of Cars and others — trained 10,000 people, which is below the world record number of 11,840 for CPR trainees.

Wael Mutairi, director of the General Directorate of Health Affairs in Makkah, told Arab News that the initiative aimed to train the largest number of people in CPR to meet the requirements for the Hajj and Umrah, as well as for tourism.

“We want Makkah to be a safe city with no health problems. That is why we came up with this initiative. When we checked Guinness World Records, we found that the largest number is 11,840. We decided to break this record and exert great efforts for the sake of pilgrims who visit Makkah from all over the world. We contacted Guinness and explained to them that we were aiming for 16,000 trainees. We chose this number to encourage participants to break the record. We planned everything including time, categories of people participating and the proposed scenario for the initiative,” he said.

A project as big as this requires the participation of many government authorities, such as the Ministry of Education, to invest in the capabilities of students from the middle and high schools as well as college students and give them something useful to teach other members of society, including family members.

More than 16,800 trainees registered for the initiative. However, organizational problems prevented many trainees from entering the stadium where the initiative was held. In addition, teenage students did not comply with the timeframe.

“We’re glad that we have trained 10,000 people on CPR in one day and this is something gratifying for us. We, of course, have learned from our mistakes and we will avoid them in the future,” Mutairi said.

Ibrahim Al-Thaqafi, a student counselor, said that the initiative was a good one, although it had encountered several obstacles. On the positive side, thousands of students had been trained in CPR, he said.