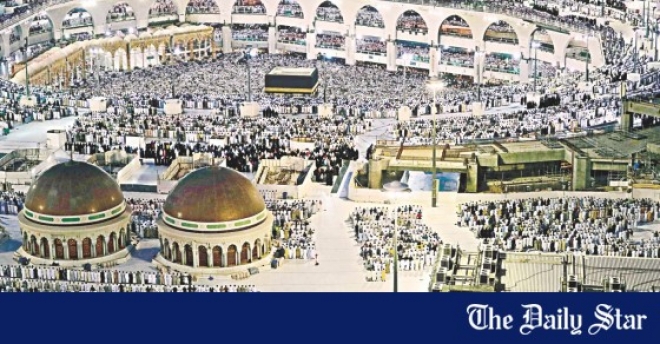 A Bangladeshi aspirant pilgrim will have to spend a minimum of Tk 3,61,800 to perform hajj this year under private management, around Tk 17,000 more than the previous year.

With affordability in mind, HAAB, however, has also introduced a "super economy package" for the first time, M Shahadat Hossain Taslim, president of HAAB, said at the press conference.

The hikes in airfare by Tk 10,000 and visa fee by 7,000 have mainly contributed to the increase in total expenses, Taslim added.

Apart from the two rates, private hajj tour operators will be able to announce special hajj packages based on the quality of service and accommodation.

"But no hajj agency will be allowed to announce hajj package below the minimum rate of Tk 3.17 lakh to ensure a minimum standard of service," said the HAAB chief.

He said the hajj packages were categorised based on the distance of the pilgrims' accommodations from Masjid al-Haram.

In 2019, an aspirant pilgrim had to spend a minimum of Tk 345,800 to perform hajj under private management.

The Haab boss also said every pilgrim under private management would have to pay an additional amount of Tk 12,000 for a Qurbani (sacrificing animals) coupon from the Islamic Development Bank in Saudi Arabia.

Earlier on February 24, the cabinet approved the Hajj Package 2020, under which a Bangladeshi hajj aspirant will have to spend Tk 4.25 lakh for package-1 and Tk 3.60 lakh for package-2 to perform hajj under government management, which is Tk 6,500 and Tk 16,000 more than the corresponding packages of the previous year.

Considering affordability, the government for the first time introduced package-3, which would cost Tk 3.15 lakh.

As per an agreement between Bangladesh and Saudi Arabia, a total of 1,38,198 Bangladeshis will perform hajj this year. Of them, 17,198 will perform the ritual under government management and the rest under private management, according to government data.

The registration of prospective hajis will start from March, said the HAAB president.

Depending on moon sighting, the hajj is likely to be held on July 30.