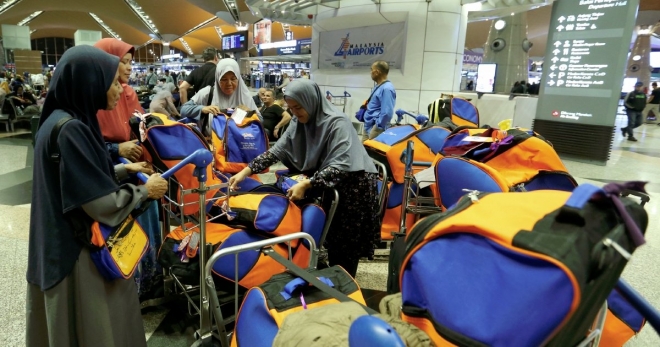 KUALA LUMPUR: The move by Saudi Arabia to suspend the issuance of visas for umrah (minor pilgrimage) not only caught travel agencies off-guard but has also seen them incurring huge financial losses.

This is because pilgrims who cancelled their trip to the holy land have sought refunds from the travel agents.

On Feb 27, the Saudi government suspended visas for pilgrims who wished to visit Makkah and Madinah over mounting Covid-19 fears.

“The money paid by customers was used for hotel and flight bookings.

“Airlines and hotels have agreed to defer the booking dates instead of issuing refunds.

“It’s not up to us to cancel umrah. The Saudi government has deferred the trips instead of asking us to cancel them.”

Ali hoped customers would be patient until travel agencies find a way to refund their money. He said visa suspension caused millions of ringgit in losses for travel agencies.

“On average, we handle about 30,000 pilgrims a month, generating RM115 million in revenues.

“One of our association members suffered RM1.5 million losses due to the suspension.

“We understand the fears and risks in travelling now, especially with the Covid-19 outbreak, but we are burdened by the refund issue. This involves not only umrah trips but also domestic, inbound and outbound travel.”

Ali said the “Fourth Schedule” provision of the Tourism Industry Act 1992 had put travellers and travel agents in a difficult situation.

“If we do not comply with customers’ request for refunds, they’ll use the clause in the act against us.

“But if we do pay back, we are only allowed to refund RM30, or two per cent, whichever is higher, of their full tour fare. They will not be pleased with this as well. This is why we have to fork out our money to pay the refunds.”

Mahayani Ishak, 58, was dejected over the suspension as she was looking forward to her pilgrimage after paying nearly RM20,000 for the trip.

“There were about 100 people in my pilgrimage group. We arrived at the Kuala Lumpur International Airport at 9am on the day of departure.

“Our flights were scheduled to take off at 4pm. We checked in about 1pm. We heard rumours that pilgrims were not allowed to board the plane.

“At 2.30pm, our mutawif (guide) told us that we could not board the flight as pilgrims from Malaysia and 24 other countries had been denied entry to the holy land by the Saudi government,” she told the New Sunday Times.

Mahayani said she was disappointed that the trip was cancelled just hours before boarding her flight.

“I have performed umrah several times, so I could console myself (with that fact). Can you imagine how those who were going there for the first time must have felt?”

She hoped her travel agent would update her on the postponed umrah trip.

“Until today, we are only told that they will postpone our trip pending further notice from the Saudi government.”

Muhammad Shafaris Kosim, 25, said he paid around RM5,900 for the umrah package a month before the trip this month.

“A representative from my travel agency informed me about the suspension via a WhatsApp message. I was given the option of postponing the trip or getting a refund.

“I will wait for my turn. I believe things happen for a reason. Besides, it will be my first trip to the holy land and the wait is worthwhile.”

A Singaporean, who wanted to be known only as Dermawati, 64, said she paid more than S$4,000 for the umrah trip.

“I was informed about the visa suspension over the phone a few days before my flight.

“I was devastated because I had waited so long for it. This was supposed to be my first trip to the holy land.”

She said she was so upset that she could not decide whether to get a refund or postpone the trip.

“But I have come to terms with it. I fully understand the move by the Saudi government.

“With millions of Muslims coming from every part of the world for umrah, they have every reason to worry, following the Covid-19 threat.”