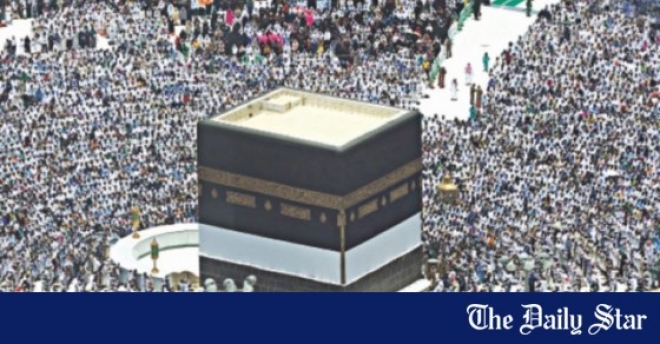 The government has suspended all hajj activities following lukewarm response from intended hajis and advice from Saudi Arabia amid the coronavirus outbreak.

So far, only 66,000 intended hajis have got registered against a quota of 137,198 Bangladeshis to be allowed by Saudi Arabia to perform this year's hajj, according to the religious affairs ministry.

"Upon the expiry of the fourth deadline for hajj registration on April 30, we found that only 66,000 intended hajis completed their registration for performing hajj. That's why we have decided not to extend the deadline further... All hajj activities have been suspended," Nurul Islam, secretary at the ministry, told The Daily Star yesterday.

"Last month, the Saudi government advised us not to proceed further with this year's hajj plan," said the secretary.

"There is uncertainty over this year's hajj due to the coronavirus pandemic. We are now waiting for Saudi government's message to decide on our next course of action," added Nurul.

Leaders of Hajj Agencies Association of Bangladesh (HAAB) said people were not interested in getting registered for performing this year's hajj due to the coronavirus outbreak.

"The hajj aspirants have serious doubts whether hajj will be held this year," M Shahadat Hossain Taslim, president of HAAB, a platform of private hajj tour operators, told this correspondent.

Both the ministry and the HAAB said the pilgrims will get back their money paid for registration if hajj is not held this year because of the coronavirus pandemic.

On April 16, the religious affairs ministry extended the deadline for hajj registration for the fourth time till April 30. The registration began on March 2 and was supposed to end on March 15.

On April 1, the Saudi government urged different countries to delay hajj plans due to the pandemic.

Hajj flights are scheduled to start on June 23.