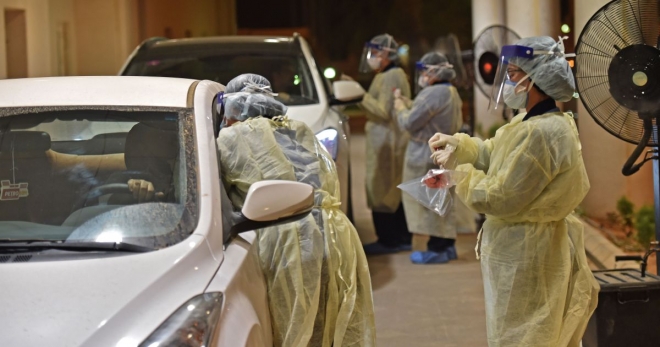 THE Quran does not mention any plague (ta'un) by name, but makes references to destructions of bygone people, adding also that calamities occur only within God's all-embracing knowledge (57:22; 64:11). Ta'un is the subject, however, of many hadiths in al-Bukhari and Muslim, including:

"If you hear of the outbreak of ta'un in a land, do not enter it; but if it breaks out in a place while you are in it, do not leave that place.

"When ta'un has struck, any faithful who stays patiently at home while knowing that nothing befalls him that God has not pre-ordained – earns the reward of a martyr," or "Death from a plague is martyrdom for every Muslim."

Lastly, "(And with regard to animals): The sick should not be taken where the healthy ones are."

Some Muslim scholars have drawn the conclusion that the Prophet's movement control orders during plagues are obligatory.

It is also not accidental that Ibn Sina (d. 428/1037), a Muslim scientist, was the first to introduce a 40-day social isolation measure calling it 'al-Arba'iniyah', which was almost literally translated as 'quarantine' in European languages.

The Covid-19 pandemic that has hitherto claimed over 325,000 lives, prompted authorities around the world, including in Malaysia, to impose restrictions on movement, business and travel.

The caliph 'Umar's management of the plague of 'Amwas is a case history of contemporary relevance: when the caliph heard of its outbreak, he decided to go to Syria himself to manage it. Upon reaching Surgh outside Madinah, he met with Abu 'Ubaidah al-Jarrah, Commander of the Muslim army in Syria, who advised the caliph to proceed to Syria.

At this point, 'Abd al-Rahman ibn 'Awf came forward and quoted the hadith from the Prophet that when plague is raging, one should not go from the non-infected to the infected area or vice versa. That settled the matter and 'Umar returned to Madinah.

The caliph then ordered that troops be moved to a healthier place in Jabiah. However, days after arrival, Abu 'Ubaidah died of the plague, followed by Muadh b. Jabal. Their successor, 'Amr bin al-'Aas executed 'Umar's orders to shift the troops to the hills, and to separate them into smaller groups to reduce interactions.

Muslims were asked by their governments to perform Friday and other daily prayers at home to contain the deadly virus. Protection of religion had thus to give way to the protection of life. Travel bans imposed by Muslim countries also meant postponement of the 'umrah – and it looks likely even of the haj.

Congregational prayer and 'umrah are arguably Sunnah, not wajib, but even the haj proper, which is wajib, may be postponed to save life – a higher wajib. This order of priority is also noted in the following example: when a fit person sees another drowning, yet he runs the risk of losing the salat time – which should he prioritise? The answer is definitely to save the drowning.

Instances of conflict between the protection of life and that of property (hifz al-maal) have also been noted. Almost all businesses are shut under lockdown conditions and people are suffering, some with extreme hardship, yet all this is tolerated in order to protect life.

The traditional order of the maqasid that places religion first is based on an extremist scenario: when enemy forces attack a Muslim country, Muslims are duty-bound to fight and sacrifice their lives for their religion. But extreme situations are unrealistic, as no order can be observed in emergencies.

One also gives life to protect one's property, family etc., hence maqasid priorities should be based on normal, rather than extreme, situations.

For life is the sine qua non of all other syariah ordinances and should therefore come first. Hence, a corrective is due to the conventional ordering of the essential maqasid – if the syariah is to relate meaningfully to people's lives.


⇐ Previous:
Thousands of Iranians register for, plan to attend hajj amid coronavirus
Next: ⇒
Decision on pilgrimage to be announced after Raya