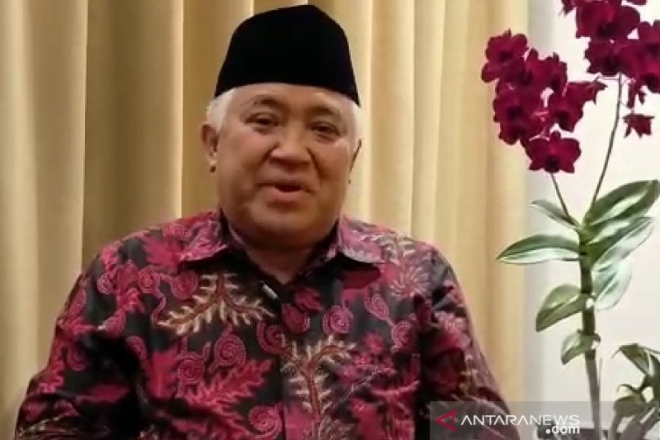 A notable Islamic scholar requested the government, Thursday, to convince the country’s Muslims affected by its cancellation of 2020 Haj trips that the decision was right amid the ongoing global novel coronavirus disease (COVID-19) pandemic.

"Through a persuasive approach, please convince our Haj pilgrims, who are left disappointed (by the government’s decision) for not being able to travel to Mecca," Din Syamsuddin, head of the Indonesian Ulema Council (MUI) Advisory Council, stated.

Despite the mass public disappointment, Syamsuddin, nonetheless, concurred with the government's decision to cancel Haj trips announced by Religious Affairs Minister Fachrul Razi on Tuesday based on the risks posed by the COVID-19 pandemic.

Speaking in connection with Haj deposits at conventional banks, the former leader of Muhammadiyah, Indonesia's second-largest Muslim-based organization after the Nahdlatul Ulama (NU), suggested that "nisbah," or revenue sharing, be given to Haj deposit owners.

Syamsuddin pointed out that the COVID-19 pandemic had weakened the economy, so cash was direly needed to meet the basic necessities of the public.

The Indonesian government officially announced its decision to not send Hajj pilgrims to Saudi Arabia in 2020 amid the COVID-19 pandemic.

The haj pilgrimage stands cancelled in accordance with Religious Affairs Minister Regulation No. 494 of 2020 since the safety and health of pilgrims must be prioritized, right from their departure to during the course of the pilgrimage and upon their return to the country.

The decision was taken on the basis of a comprehensive study conducted by a team of the ministry and after consultation with the MUI.

As the world's largest Muslim nation, the Saudi government has frequently offered the highest quota to Indonesia. During this year's haj pilgrimage season, Indonesia was allowed to send 221 thousand pilgrims to Mecca in the event of it not being canceled.

"The government must not further escalate the level of public disappointment by utilizing the Haj pilgrims' funds for other requirements, including a discourse on their use for Bank Indonesia's foreign exchange intervention," he had remarked earlier.

Hasan stated that the central bank must use its dollar reserve, projected to reach US$127.9 billion, instead of the Haj pilgrims' funds, for intervening in the foreign exchange market to strengthen the rupiah value against the US dollar.


⇐ Previous:
Hajj pilgrimage from Azerbaijan may not take place this year
Next: ⇒
We are awaiting Saudi authorities decision on Hajj 2020, says NAHCON