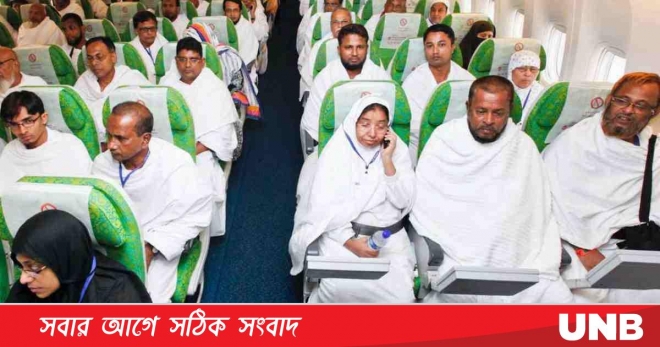 About 50 days are left before the largest congregation of Muslims, yet an uncertainty looms over Hajj this year in Saudi Arabia because of the coronavirus pandemic.

The decision is yet to be taken for Hajj scheduled to be performed by millions of Muslims in late July this year.

“There’s no certainty over Hajj this year as the government of Saudi Arabia is yet to take the final decision in this regard,” State Minister for Religious Affairs Advocate Sheikh Abdullah told UNB.

However, we’re maintaining constant communication with the Saudi government, he said adding that Bangladesh will know as soon as there’s any decision.

“Coronavirus situation is not well in Saudi Arabia. Hajj depends on the situation,” he added.

He said if Saudi Arabia informs Bangladesh about their decision, then Dhaka would take its decision after consulting Prime Minister Sheikh Hasina. “We’re fully prepared.”

Asked about a report by Reuters about the decision of Saudi Arabia of arranging Hajj with limited number of pilgrims, Abdullah said: “It’s baseless because the Saudi government has not taken any decision over Hajj.”

He assured that the registered pilgrims will be allowed to perform hajj next year.

“Don’t worry. If you cannot perform Hajj this year, you can do it next year, and if you want your money back, it’ll be given. I can give you that guarantee,” he said.

M Shahadat Hossain Taslim, president of Hajj Agencies Association of Bangladesh (HAAB), said, “Reuters ran the news on their own idea as Saudi Arabia has not informed about their official decision.”

If the Saudi government wants to arrange Hajj with fewer pilgrims, they can announce it giving less time but it depends on them, he added.

He also said that they are ready now as the registration for hajj is complete. “Whenever the Saudi government informs, we’ll send the pilgrims.”

Asked about time required for sending pilgrims, the HAAB president said the Saudi government will direct in this regard giving a logical time.

According to the Religious Affairs Ministry, 137,198 Bangladesh nationals were scheduled to go to Saudi Arabia to perform Hajj this year with 17,198 under government and 120,000 under non-government management, officials said.

However, among them, 64,594 people have registered to perform Hajj this year — 3,457 under government management and 61,594 under private management.

The Hajj registration process was completed on April 30 after the extension of the deadline several times.

Earlier on February 24, the Cabinet approved the draft Hajj Package-2020, fixing the minimum cost for an intending pilgrim at Tk 3.15 lakh under package-3 managed by the government.

In March, the Saudi government directed to suspend all Hajj activities.

The Hajj pilgrimage is expected to begin on July 30 (9th day of Dhu al-Hijjah) this year, depending on the sighting of the moon.

Hajj interruption in history by diseases

There are reports that the first time an epidemic of any kind caused Hajj to be cancelled was an outbreak of plague in AD 967. And drought and famine caused the Fatimid ruler to cancel overland Hajj routes in AD 1048, reports AP.

Meanwhile, throughout the 19th century, cholera outbreaks in multiple years, claimed thousands of pilgrims' lives during the Hajj.

One cholera outbreak in the holy cities of Mecca and Medina in 1858 forced thousands of Egyptians to flee to Egypt's Red Sea border, where they were quarantined before being allowed back in.

For much of the 19th century and the beginning of the 20th century, cholera remained a "perennial threat" and caused frequent disruption to the annual Hajj.

So did the plague. An outbreak of cholera in India in 1831 claimed thousands of pilgrims' lives on their way to perform Hajj.

In fact, with so many outbreaks in such quick succession, Hajj was frequently interrupted throughout the mid-19th century.