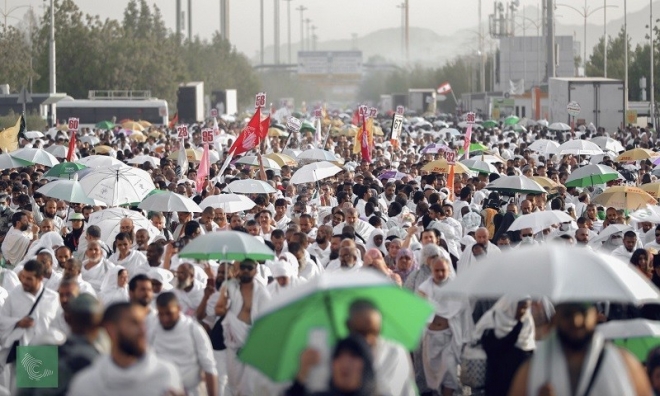 Saudi Arabia has issued guidelines for the pilgrims that will be allowed to perform the hajj pilgrimage in Makkah later this month, an experience that will be unlike any before because of the coronavirus pandemic.

The pilgrims will only be able to drink holy water from the Zamzam well in Makkah that is packaged in plastic bottles, and pebbles for casting away evil that are usually picked up by pilgrims along hajj routes will be sterilised and bagged ahead of time. Pilgrims will also have to bring their own prayer rugs.

The guidelines were announced on Monday as Saudi authorities prepare to carry out a very limited hajj, which for the first time will not include pilgrims from outside the country.

Instead, the kingdom said that 70 per cent of pilgrims allowed to participate this year will be from among foreign residents of Saudi Arabia while 30 per cent would be Saudi citizens.

Saudi pilgrims will be selected from among healthcare workers and security personnel who have recovered from COVID-19, the illness caused by the virus. The government said their selection represents a “token of appreciation for their role in providing care” during the pandemic.

Saudi Arabia has one of the Middle East’s largest outbreaks of the virus, with infection rates rising by 3,000-4,000 cases daily. More than 213,000 people have contracted the virus in the kingdom so far, including 1,968 who have died.

The new guidelines also mandate that foreign residents in Saudi Arabia who want to participate in this year’s pilgrimage should be between the ages of 20 and 50, and that have not performed the hajj before.

The pilgrims will have to quarantine before and after the hajj, and they will be tested for the coronavirus. Those eligible have until Friday to submit an application through the kingdom’s Hajj Ministry’s website.

The hajj is not only a once-in-a-lifetime requirement for Muslims but also a chance to wipe away past sins and connect with Muslims from different walks of life.

Saudi Arabia dramatically scaled back the hajj due to concerns about overcrowding at the annual pilgrimage, which usually draws 2.5 million people. The crowds move, pray and stand in extremely close proximity, often squeezed shoulder-to-shoulder, as they carry out five days of rites around Makkah.

Saudi Arabia said its decision to curtail the hajj was aimed at preserving global public health because of the risks associated with large gatherings.

Pilgrims normally crowd and push their way toward the cube-shaped Kaaba, which is Islam’s holiest site and the metaphorical house of God. This year, authorities said anyone participating in the hajj will not be allowed to touch the Kaaba as part of the new safety measures. Pilgrims this year will also have to wear masks, maintain physical distance during prayers and sleep in tents that follow guidelines on social distancing.


⇐ Previous:
Work progresses as planned on Makkah’s Masar project
Next: ⇒
Registration for Hajj begins; 70% will be expats