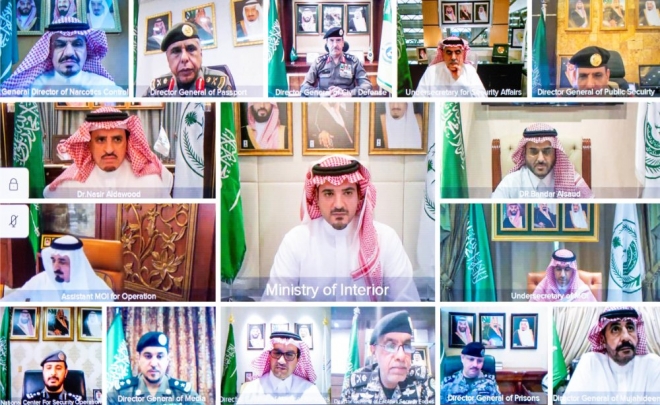 Prince Abdul Aziz bin Saud bin Naif, minister of interior and chairman of the Hajj Supreme Committee, chaired a virtual meeting on Wednesday with the heads of  security agencies and officials in charge of this year’s Hajj season.

During the meeting, the minister and security officials discussed organizational issues related to Hajj, including preventive and precautionary steps related to fighting the coronavirus disease, procedures related to pilgrims commuting to the holy sites, and mechanisms to facilitate performing the Hajj rituals.

Prince Abdul Aziz confirmed abiding by the directives of King Salman and Crown Prince Mohammed bin Salman to take all precautions to preserve the safety of the pilgrims, and facilitate their performance of their Hajj rituals, according to the highest health standards to contain the new coronavirus pandemic.

Saudi Arabia has decided to allow only a limited number of domestic pilgrims to perform Hajj this year in the wake of the COVID-19 outbreak.

Only those expatriates between the ages of 20 and 50 who are not suffering from any chronic diseases can apply for the pilgrimage.

Earlier, the Ministry of Hajj and Umrah said that requests from people of 160 nationalities in the Kingdom have been screened electronically to select who will perform Hajj this year.

Meanwhile, the Ministry of Interior said that anyone found entering the sites of Hajj (Mina, Muzdalifah and Arafat) without a permit from July 18 till the end of Dhu Al-Hijjah 12 will be issued with a fine of SR10,000 ($2,600).

The fine will be doubled if the offence is repeated. Security personnel will be posted on roads leading to the holy sites to ensure that anyone who breaks the law will be stopped and fined.


⇐ Previous:
Hajj cancelation due to COVID-19 hurting Somali farmers
Next: ⇒
Kaaba to be exactly under the Sun today