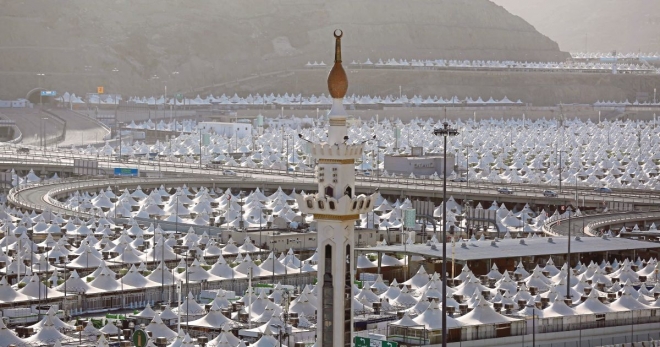 Makkah, the holy city, this time is about to experience a rare occasion with a limited number of not more than 10,000 pilgrims compared with more than two and a half million pilgrims last year.

Throughout haj, men wear ihram while women wear garments to cover their aurat, allowing them to expose their face, palms and soles.

The ihram — similar to the shroud that is worn after death and the only worldly wealth to be taken to the grave — is also a reminder that all are bound to leave this world empty-handed as the same when we arrived.

Haj commences on the ninth day of Zulhijjah (the last month in the Islamic calendar) by arriving at any point in the plain of Arafah before sunset.

Standing on Arafah is the reminder of Allah forgiving Prophet Adam and his wife Hawa (Eve) — the event where mankind began the journey on Earth.

At the onset of sunset, the pilgrims march from Arafah towards the plain of Muzdalifah, where they stay at least one-third of the night under the open sky — reminding the minuscule existence of human entity in the universe.

Then the pilgrims would either go to the plains of Mina or to the Masjid-al-Haram to perform seven times tawaf (circumambulation) around the Kaaba.

Those who go to Mina first, eventually have to go to Masjid-al-Haram to perform tawaf. Upon completion, they perform saie — marching seven times between two nearby mountains named Safa and Marwah.

The tawaf around the Kaaba, an empty cubicle, the house of Allah and the first mosque on the Earth, which was built by Prophet Ibrahim, indeed is the reminder of worshiping none but Allah.

Marching between Safa and Marwah reminds us of the event when Hajar — the second wife of Prophet Ibrahim was left in the middle of the desert with their baby boy Ismail who later became a prophet.

Knowing the fact that there is no food, water or any other signs of life, Hajar submitted to the command of Allah to stay in the desert with her baby.

The haj rituals end with the sacrificial slaughtering of an animal — the ultimate gratitude and submission of Prophet Ibrahim to observe the command of his Creator.

Those rituals signify the command of Allah for the very existence of mankind and to serve the purpose of life.

Every ritual reminds one of the ultimate faith and devotion of a mukmin (sincere believer) for Allah the Almighty — to worship and obey only Him.

By reciting the Talbiyah, the pilgrims testify that ultimate truth throughout the haj.

If the rituals are accepted, the pilgrims are expected to be forgiven for all past sins by Allah the Most Merciful and the Most Kind.

This is why, Muslims who have had the opportunity to perform haj dedicate their utmost sincere effort to observe all the rituals as perfectly as possible.

With or without performing the haj, every Muslim is expected to lead life as a mukmin with the faith that Allah is the only Creator of everything in the universe, nothing but His law governs the universe and is so for our living in this world. And finally, to Allah, we are all bound to return.

This remains the same since the time of the earliest prophet. By accepting the ultimate truth, one enters the sanctuary of Islam and becomes a Muslim.

Indeed, Allah asks every human being to become a Muslim before they die (Quran 3:102).

There are more than 80 verses in the Quran that command the mukmin to lead their life according to the precepts of truth and goodness.

And that will make their journey more meaningful. Indeed, haj gives us the lessons to become successful mukmin.