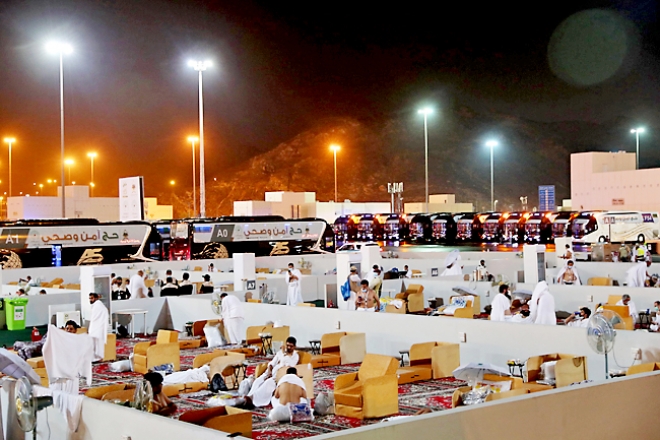 MAKKAH (AFP) – A smaller carbon footprint, less waste and more environmentally friendly – this year’s pilgrimage to Makkah, dramatically scaled down due to coronavirus, has opened up the prospect of a “green Haj”.

In addition to being a logistical and security headache, one of the planet’s largest gatherings, which drew some 2.5 million people last year, also typically poses huge environmental challenges.

The procession of so many worshippers, over a short time and in a limited space, results in an assault on the kingdom’s delicate environment.

Thousands of vehicles generate substantial air pollution, while the pilgrims leave behind an avalanche of waste, including enormous quantities of plastic water bottles.

This year’s Haj, limited to a maximum of 10,000 attendees, was by all accounts literally a breath of fresh air. But for environmental activist Nouhad Awwad, it’s not so much the size of the crowd that determines the impact on the environment but more “our collective behaviour”.

“This year’s Haj, although taking place at a difficult time globally, can be a source of hope,” the Greenpeace campaigner told AFP. “It gives an idea of what a green pilgrimage could look like,” she added.

The scenes in Makkah since the Haj began on Wednesday are very different from those of past years.

Rather than the vast crowds that move between the sites, casting rubbish as they go and sometimes prone to deadly crushes, the movement of the pilgrims has been limited and orderly.

Even the pebbles they use to symbolically “stone the devil” have been sanitised, as part of elaborate amenity kits provided by authorities that include disinfectant and masks.

“Everything is clean and there are only a few municipal workers collecting the small amounts of garbage,” Azim Allah Farha, a pilgrim from Afghanistan who has performed the Haj several times before, said at Mount Arafat, the site of one of the main rituals.

One of those workers, Rahim Fajreddine, recalls the hundreds of tonnes of rubbish – plastic bags, cans and food plates – left in past years at the rocky hill outside Makkah where pilgrims pray and repent in the high point of the Haj. “Large numbers of workers had to be mobilised to remove all the debris they left behind as they passed,” he recalled.

As Custodian of the Two Holy Mosques, the kingdom was concerned primarily with accommodating as many pilgrims as possible, mindful of the long waiting lists for Muslims, who must complete the Haj at least once in their lifetime if they are able. Huge extensions have been built in recent decades to increase the capacity of the two mosques and pilgrimage sites.

Saudi Arabia hopes to welcome 30 million pilgrims to the kingdom annually by 2030.

However, by 2018 the local authorities launched a waste separation programme and began to consider recycling. Signs in several languages were posted to encourage the pilgrims to do their bit and dispose of their waste properly.

This year, despite the relatively tiny number of pilgrims, the municipality deployed more than 13,000 cleaners to the holy sites, equipped with hundreds of skips, according to an official statement.


⇐ Previous:
Restricted Hajj hits Somalia’s struggling livestock economy
Next: ⇒
One crew with a hundred and one stories to tell, Hajj unites all