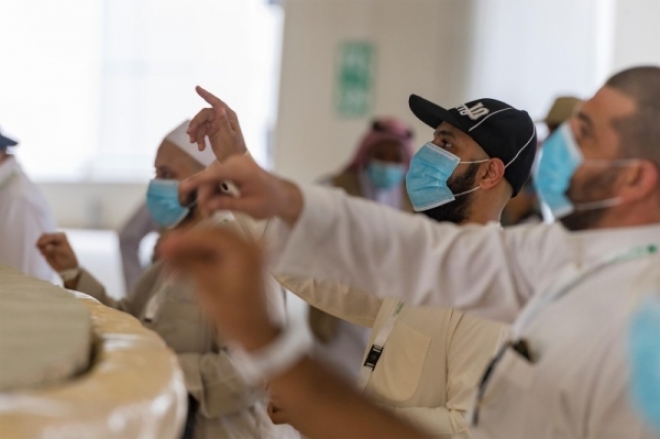 MINA — As the annual pilgrimage of Hajj reached its final phase on the fourth day on Saturday, pilgrims threw stones at all the three pillars or Jamarat, symbolizing Satan. In total compliance with the coronavirus preventive protocols during this year’s exceptional Hajj, men and women domestic pilgrims hailing from 160 nationalities proceeded from their residential towers in Mina to the Jamarat Complex on their scheduled time this afternoon.

Wearing masks and their normal dress after exiting from ihram on Friday, they moved in batches in an orderly and smooth manner while maintaining a physical distance. On their arrival at the Jamarat, pilgrims, chanting “Allahu Akbar” (God is the greatest), stoned first at Jamarat Al-Sugra (small pillar), then at Jamarat Al-Wusta (medium pillar) and lastly at Jamarat Al-Aqba (largest pillar) seven times each. The pilgrims moved easily from one pillar to the next as they hurled pebbles at the pillars.

They prayed after stoning the first two pillars and quit quickly after stoning at the third Jamarat, following the tradition of the Prophet (peace be upon him). Pilgrims were allowed to perform the ritual from the first and the third floor of the Jamarat Complex. The ritual began on Friday by stoning only at Jamarat Al-Aqba from the ground floor of the complex. A huge contingent of security forces and health workers were deployed at the Jamarat Complex to ensure the safety and health of the pilgrims as well as their smooth conduct of the stoning ritual.

Stoning at Jamarat is the most repeated rituals of the Hajj. Pilgrims perform the ritual at one Jamarat (Jamarat Al-Aqba) on the first day of stoning on the Day of Sacrifice, Dhul Hijjah 10. In the next two or three days, they hurl seven stones each at the three pillars. The five-level Jamarat Complex structure around the three stoning sites allows for a smooth flow of pilgrims who are only permitted to move in one direction throughout the area to prevent congestion.

After performing four main rituals of stoning, sacrificing animals, shaving or cutting hair and performing Tawaf Al-Ifadah and sai’ on Friday, pilgrims returned to their accommodation in Mina. After Saturday’s ritual of stoning, they will spend the rest of the time in prayers and supplications. They are also listening to lectures from preachers and scholars from the Ministry of Islamic Affairs, Call and Guidance, focusing on the essence of Hajj and its rituals.

The general secretariat for Islamic awareness at the ministry is organizing these lectures and classes as the second phase of its awareness plans and programs, which are being aired through 390 closed-circuit television screens at the pilgrims’ accommodation at the end of daily obligatory prayers.

These included health awareness classes as well as religious lessons about the rules and rituals of Hajj, the importance of seeking forgiveness, and the ideal ways of supplication, the desired impact of Hajj on the life of a Muslim and the Kingdom’s efforts in the smooth conduct of a hassle-free Hajj. Dr. Saleh Bin Abdulaziz delivered a lecture on the theme of “Remember God in limited days” at 5 p.m. on Saturday and Dr. Sami Al-Sugair will deliver a lecture on “Manifestations of monotheism in Hajj” at 9 p.m.

In a related development, the General Presidency for the Affairs of the Two Holy Mosques, said that the presidency has completed sterilization and cleaning of the entire facilities of the Grand Mosque, including mataf (area for circumambulation around the Holy Kaaba), mas’a (area for the ritual of sai between Safa and Marwah), and outer courtyards after the pilgrims’ performance of Tawaful Ifadah and sa’i, two of the four pillars of Hajj. The cleaning and sterilization of the Grand Mosque is being held 10 times on a daily basis. More than 3500 male and female workers are carrying out the cleaning and sterilization work.


⇐ Previous:
One crew with a hundred and one stories to tell, Hajj unites all
Next: ⇒
6,250 cameras capture all field details at Grand Mosque and holy sites