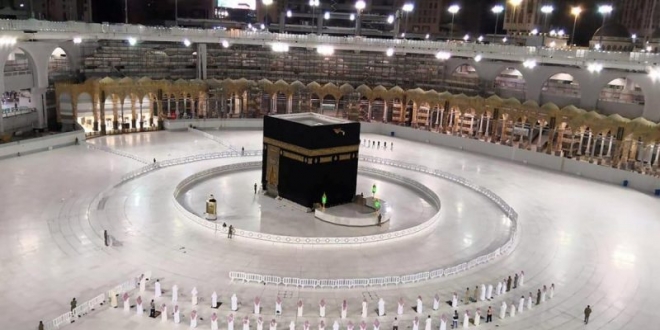 New Delhi: More than two lakh people from all over the country apply to the Haj Committee of India for a chance to go on haj – the annual Islamic pilgrimage to Mecca – every year along with the millions of people worldwide. The Haj Committee of India is a government body that comes under the Ministry of Minority Affairs, and is entrusted with organising the pilgrimage for Indian citizens.

The committee takes care of moderating and easing the process of getting passports and visas, and making travel and accommodation arrangements for pilgrims in Saudi Arabia. Maqsood Ahmed Khan, Haj Committee of India’s chief executive officer, explained, “The Haj Committee of India is an autonomous body formed under a parliament Act to provide facilities to Indian haj pilgrims through the Government of India. We take the applications of all haj applicants from across India, divide them district wise and allocate them seats.”

Until March, over two lakh Indians had already applied and the first batch of pilgrims was set to fly to Mecca in Saudi Arabia in June. However, with a coronavirus-induced ban on large gatherings in place, only a limited number of people attended the rituals of this year’s haj pilgrimage as no outsiders were allowed. The Haj Committee also said that it would not be sending pilgrims this year, keeping in mind the COVID-19 situation.

Explaining how the Haj Committee functions normally, Khan said, “Every year, immediately after haj, we have a review meeting where we start planning for the upcoming year’s pilgrimage. We decide on newer policies and make announcements accordingly. We also release the information in all languages and circulate it. That’s when people start applying for next year’s haj.”

In the last three years, the cumbersome physical process of applying for haj has shifted to a smoother platform online. “We have tried our best to shift the process online in the past few years and computerise it,” said Khan. All the applications for haj 2020 were taken online by the committee. Every year, the number of applicants exceeds the number of seats available.

“This year’s haj programme had come a long way. People had been selected, they had submitted their details as well as passports, had sent money, and we had started with the process in March. Our first flight was scheduled for the third week of June,” Khan recalled. While all haj applicants had paid the first instalment of Rs 81,000, the second instalment of Rs 1.2 lakh was only paid by some.

This year, the committee had received a total of about 213,000 applications, out of which 125,000 haj applicants were selected for the pilgrimage.

In February, Saudi Arabia, where the holy site Kaaba is situated, had instructed committees such as the Haj Committee of India not  to make commitments for this year’s pilgrimage to aspirants. Because of this, by the end of February, the process was stopped by the committee. “By February, we had already realised that the situation is not going to get any better and haj this year would not be possible. Then we had to finally tell all the hajis that it will not be possible. We started telling people to start filing for 100% refund online voluntarily in March. This process continued till the end of April.”

The committee was now faced with the challenge of reimbursing over a lakh people’s money into their individual accounts. Khan said that people expressed displeasure upon hearing that they would not be able to go for haj this year. Some people even refused to take their money back.

“The applicants anyhow wanted to go for haj. They said if not this year, they’ll go next year and kept trying to negotiate with us. They were all willing to wait till the very end to see if at all it will work out. When Saudi Arabia finally declared that no outsiders will be allowed for haj this year, that’s when the people understood that it will not work.”

According to Khan, digitisation of the haj application process immensely helped in managing this year’s funds – the collection as well as the refund. “The process of verification of the applicants’ bank accounts that was done when money was managed physically was manual. Now, because it had been filled online, it became easier and we managed to make the process of refund quicker. Thankfully, we have tracked 99.9% of the applicants and now only 500 more people are left to be tracked down so that we can refund their money.”