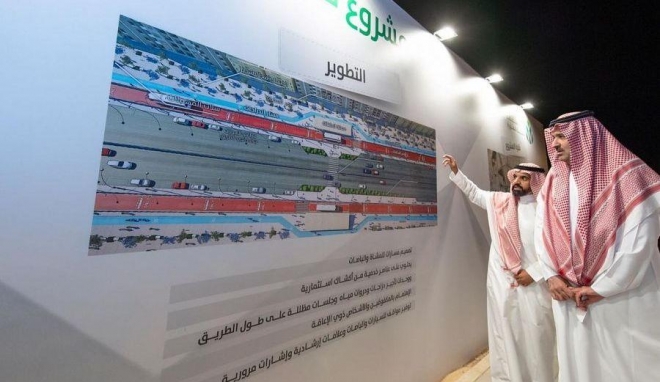 The project, which is a quarter complete, is part of a program to improve the city’s living conditions for nationals and visitors.

Prince Faisal inspected the project designs, which include pedestrian and bus lanes, and the development of service points on both sides of the road.

The project also includes preparing lanes for people with special needs, establishing spaces from the central area to the airport road intersection to achieve smooth traffic flow during rush hour, and providing pedestrian services, rest and waiting areas, and fountains.

It will also expand green spaces, increasing the number of trees and canopies along the road in a way that suits the character and identity of the surrounding area north of the Prophet’s Mosque.

The Uhud Avenue project is being implemented in several phases to ensure balanced and sustainable development, as well as the deployment of cultural, natural, and historical elements from the region.

Mayor of Madinah, Fahd bin Muhammad Al-Belaishi, said that the project aimed to invest in natural and heritage attractions, add proposed elements, and develop existing ones with the aim of transforming the avenue.

“Additionally, the project aims to raise the level of services and infrastructure that are commensurate with the operational requirements and volume of visitors,” he added. “It will also work on highlighting historical monuments and sites of importance that the road passes through.”

He said that the project would develop the facades of buildings and rehabilitate them in line with the region’s identity.

Al-Belaishi said that the municipality had developed a plan within the project’s stages to involve people from the region in the rehabilitation and development of the road in a way that would benefit the population, as well as strengthening the network of public spaces and harnessing public squares in a way that embraced social and cultural activities.


⇐ Previous:
Development of Madinah at the heart of Saudi leaders
Next: ⇒
Religious Affairs Ministry Drafts Guidelines for Umrah Amid COVID-19 Pandemic