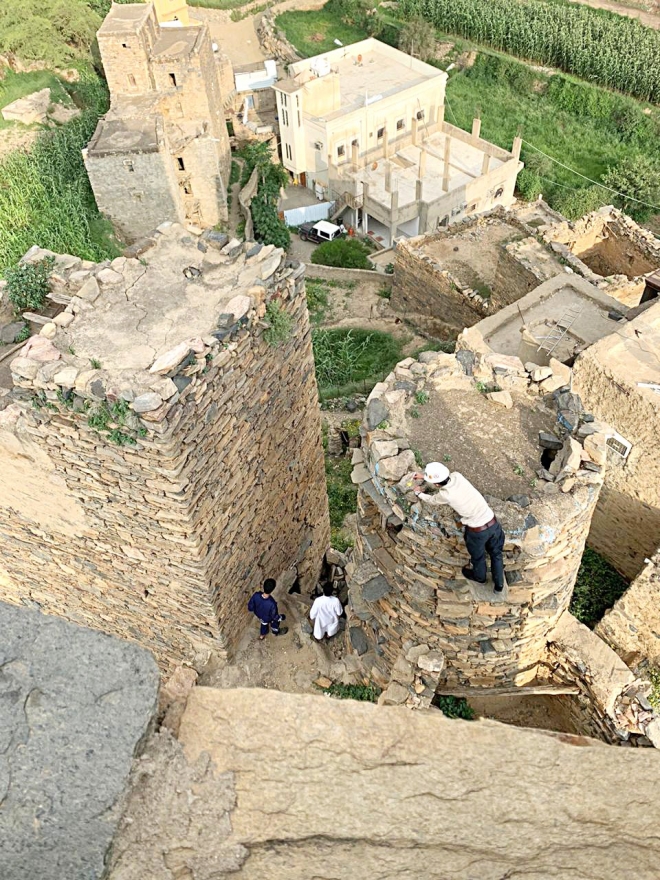 MAKKAH: Forty young Saudis from Al-Dayer governorate in the south of the Kingdom have started restoration and preservation work on historical stone castles in the region, to help protect them from damage caused by heavy rain and floods.

Under the guidance of experts in the field, they began by repairing damaged canals.

“Al-Dayer is a mountainous governorate in Jazan that is home to a great number of stone palaces and castles, to the point where some people see it as the largest archaeological concentration of historical castles in the world,” said Yehya Sharif Al-Maliki, an adviser to the restoration team.

Almost every part of the region has forts and castles, he added. Al-Yehya area alone is home to a large number, along with five small villages.

“After noticing the effects of climate factors and manmade practices, the team fenced off the sites and began to restore the castles, in line with technical consultations, to preserve their very old, historical value,” he said.

The castles date back as far as 4,000 years and are renowned for their strength and outstanding durability, Al-Maliki added. In 1940, for example, an earthquake of magnitude 6.7 struck the area and the castles were not damaged at all.

He said the restoration team includes engineers, architecture enthusiasts and others. They were motivated to restore the castles by the large numbers of Saudi and foreign tourists attracted each year by their architectural and artistic beauty.

“The historical castles of Al-Dayer feature ancient inscriptions and engravings, reflecting the religious culture of the Himyarite and Sabaean civilizations,” said Al-Maliki. “Linarite, a type of stone known for being abnormally strong, was used in building these castles, thus preserving these inscriptions for thousands of years.”

The leader of the restoration team, Jaber Ali Al-Maliki, said some villages in the region have experienced natural disasters, which motivated the team to take the initiative to protect the castles from the effects of strong winds and heavy rainfall.

“The team has repaired the canals and fenced off the sites, especially the castles that are located in residential neighborhoods, which increases the chance of their collapse,” he said.

Al-Yehya is on the slopes of Al-Areef mountains, surrounded by virgin forests to the east and water-rich valleys, including a manmade valley to the west, created long ago, with lavish architecture that showcases the rich history of the area and its peoples.

Although the geographical location of the area provided it with some protection from invasion and conquest by the armies and nations that have ruled the region since ancient times, such as the Sabaeans and Himyarites, the influence of these eras and cultures can be seen in the architecture.

“These castles reflect the architectural advancement of the successive civilizations,” said Jaber Ali Al-Maliki. “Built with beautiful stones, some of these castles are higher than four floors, with wooden doors and geometric patterns.”