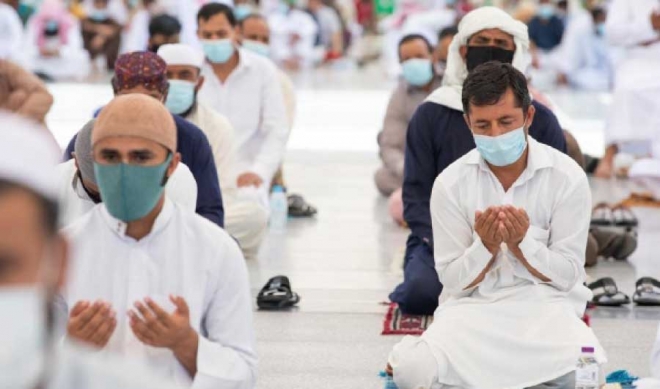 JEDDAH: The number of worshippers allowed to attend the Prophet’s Mosque in Madinah under coronavirus disease (COVID-19) restrictions on Friday reached its maximum capacity.

In line with Saudi Ministry of Health preventive regulations, officials have implemented safety measures to make it possible for the Prophet’s Mosque to operate at 40 percent of normal visitor levels.

Crowd control plans put in place by the General Presidency for the Affairs of the Prophet’s Mosque, with the help of Saudi Red Crescent Authority volunteers, enabled Friday prayers to run smoothly.

“This included sanitizing the Prophet’s Mosque and preparing it, setting up Zamzam water bottles to receive worshippers on Friday, and coordinating with the mosque’s armed forces and Hajj and Umrah armed forces to facilitate entry into the mosque,” he said. Al-Asiri added that by 10 a.m. the allocated 40 percent capacity had been met. The exit plan allowed those in the outer areas to leave first, then those on the rooftops, before finally letting out worshippers inside the mosque. As part of the COVID-19 preventive measures, people are still not allowed to pray near the Rawdah.

There were 383 new cases reported in the Kingdom, meaning 344,157 people have now contracted the disease. There were 8,315 active cases, of which 796 patients were in serious or critical condition.

According to the Ministry of Health, 42 of the newly recorded cases were in Riyadh, while Makkah reported 40, and Jeddah 11, while 397 more patients had recovered from COVID-19, taking the total number of recoveries in the Kingdom to 330,578.

Due to the pandemic, municipalities in the Northern Borders region have used more than 1.1 million liters of sanitary products to help stop the spread of the virus.

Specialized teams made up of more than 230 workers disinfected 3,487 sites using 102 sanitizing machines. A total of 440,803 cleaning containers, items of equipment, and machinery were also cleaned.

In addition, 1,054 workers have been equipped with 263 specialized machines to remove 21,276 tons of waste, and 33,162 square meters of rubble and construction waste.


⇐ Previous:
Ministry of Hajj sets accommodation protocols for foreign Umrah pilgrims
Next: ⇒
Dive Deep into The History of Medina At The Dar Al-Madinah Museum