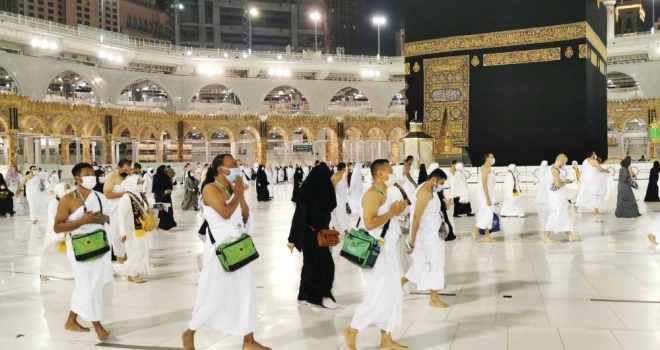 JAKARTA: Indonesian pilgrims who arrived in Saudi Arabia this week for Umrah say they feel “chosen” and “blessed” to be among the limited number of foreign worshippers able to perform the holy ritual.

A decision by the Kingdom to ease Umrah restrictions adopted earlier this year to curb the spread of the coronavirus means pilgrims from around the world are now allowed to perform the ritual and visit the Prophet’s Mosque in Madinah under strict conditions.

“I feel like I am one of the chosen ones, given the limitations set due to the pandemic. It is like going through a profound sense of enlightenment,” said Budi Firmansyah, who arrived in Makkah on Tuesday with a group from the Association of Indonesia Hajj and Umrah Organizers (AMPHURI).

Firmansyah was initially due to lead a group of pilgrims on Feb. 29, but coronavirus restrictions led to the trip being canceled.

“I feel a deeper sense of reverence compared with the first time I arrived in Makkah in the early 1990s,” he told Arab News by phone. “I was so amazed at that time, but I am even more amazed this time. This would be the best moment to perform the ritual.”

All pilgrims undergo a mandatory three-day quarantine on arrival. “I am now enjoying the view of the Holy Mosque tower from my hotel room before we begin to perform Umrah on Friday,” Firmansyah added.

Ita Puspitawati Jayadi, a businesswoman, said she could not believe her luck when she learned she would be leaving for Makkah.

“I feel very blessed that I will be able to perform Umrah. This is like a dream come true,” she said.

She is due to depart on Nov. 8 with a female colleague from her Umrah travel firm, and is looking forward to seeing new regulations implemented by Saudi Arabia to facilitate women pilgrims.

“There are plenty of female friends and clients who have told me they want to hear about my experience as a female pilgrim in the current situation,” Jayadi told Arab News.

She said that both the Indonesian and Saudi authorities “are doing their best to protect the pilgrims.”

Firmansyah said that Saudi authorities have made “impressive” arrangements to protect pilgrims. He also saw a group of female immigration officials at the airport. “It was the first time I ever saw an all-female Saudi immigration squad,” he said.

As Umrah resumes, less than a half of 56,000 Indonesians planning to travel to Makkah will be allowed to make the journey because of current restrictions.

“We are updating the list of those in the 42 percent bracket. The main obstacle will be families with elderly parents or couples who would not be able to travel together as many of them are over 50,” AMPHURI Chairman Firman M. Nur told Arab News.

He expressed his gratitude to the Saudi government for resuming Umrah for international worshippers and “choosing Indonesia as one of the first few countries allowed to send pilgrims.”

Muharom Ahmad, secretary of the Indonesian Hajj and Umrah Tour Operators Society, told Arab News that most of those now traveling to Makkah are involved in the pilgrimage sector, and will observe all procedure changes before adjusting their travel packages accordingly and updating prospective pilgrims on the new regulations.

“We want to make sure that we know first-hand the new rules to perform Umrah so that we can convey the right information to our clients,” he said.