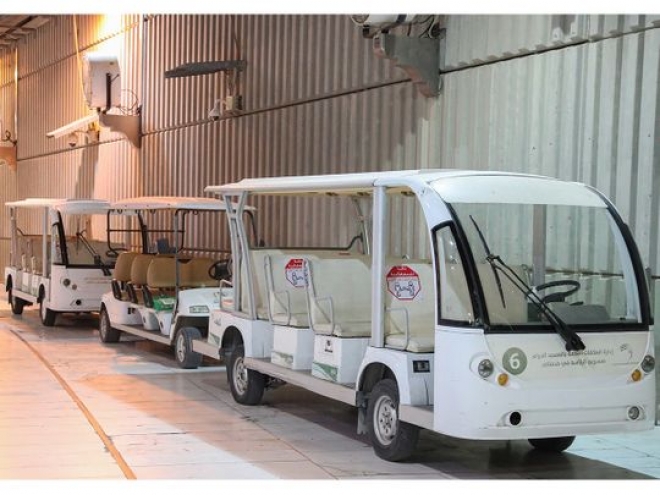 Saudi authorities have launched new carts for carrying old pilgrims and worshippers inside the Grand Mosque in Mecca to facilitate their movement.

President General of Affairs of the Grand Mosque and the Prophet’s Mosque, Abdulrahman Al Sudais, said that the carts aim at allowing the Umrah pilgrims and the elderly worshippers inside the holy site to move easily and smoothly. “This is among the services the General Presidency is seeking to develop,” he said.

Al Sudais also stressed the importance of continued implementation of precautions against the spread of COVID-19 including constant sterilization and distancing among tracks used during the performance of holy rituals.

A number of assembling points have been designated to help the smooth movement of the pilgrims, he added.

Last October, Saudi Arabia set into motion a phased plan for resumption of the Umrah or minor pilgrimage after suspension of around seven months due to the global coronavirus pandemic. Pilgrims have since been gradually allowed into the Grand Mosque in line with stringent health rules.

The first phase of the plan, which began on October 4, allowed 6,000 Umrah pilgrims from inside the kingdom per day into the Grand Mosque.

The second went into effect on October 18, allowing about 40,000 worshippers and 10,000 pilgrims a day into the Grand Mosque. As many as 20,000 Umrah pilgrims and 60,000 worshipers per day are allowed to perform prayers in the mosque, according to the current third phase that started on November 1.


⇐ Previous:
A new museum dedicated to the life of the Prophet
Next: ⇒
500 artifacts from Prophet’s time showcased in Madinah exhibition