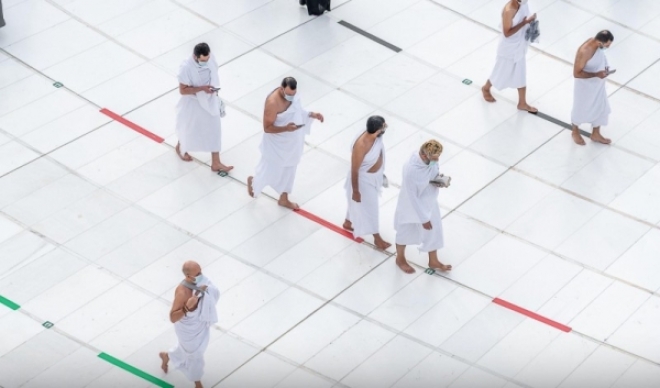 RIYADH — The Ministry of Hajj and Umrah announced that a certificate to show that vaccination has been taken against coronavirus from their respective countries is mandatory for foreign Umrah pilgrims.

This was stated by Eng. Hisham Saeed, spokesman of the ministry, while replying to a question from Okaz/Saudi Gazette during the joint press conference held on Sunday to brief all on the coronavirus situation.

He unveiled the ministry’s mechanism for the pilgrims coming from outside the Kingdom during the holy month of Ramadan, saying that the health status of the pilgrims is linked in the Ministry of Health’s “Tawakkalna” application.

Under the mechanism, the foreign pilgrims who have their vaccination certificate shall proceed to one of the Inaya (care) centers in Makkah to verify the authenticity of the certificate.

After this process, the center officials will fix for them the date and time for performance of Umrah and prayer at the Grand Mosque.

The Ministry of Hajj and Umrah last Thursday announced mechanisms and regulations for pilgrims coming from outside the Kingdom to perform Umrah.

In a statement on its Twitter account, the ministry said that there are five steps that need to be followed by foreign Umrah pilgrims before performing their rituals.

All foreign pilgrims must move to the Inaya Center in Makkah six hours before performing Umrah, verify the status of their vaccination, wear digital wristbands, present their bracelets upon arrival at the Al-Shubaika Assembly Center to verify the data and permits and abide by the date and time assigned to them to perform Umrah.

Foreign pilgrims are required to spend three days in quarantine in their respective hotels in Makkah after their arrival in the Kingdom.

During Ramadan, the number of permits for Umrah pilgrimage has been raised to 50,000 pilgrims on a daily basis.


⇐ Previous:
Saudi Arabia does not rule out surprise decisions regarding resumption of flight service
Next: ⇒
Saudi yet to clarify status of Hajj 2021