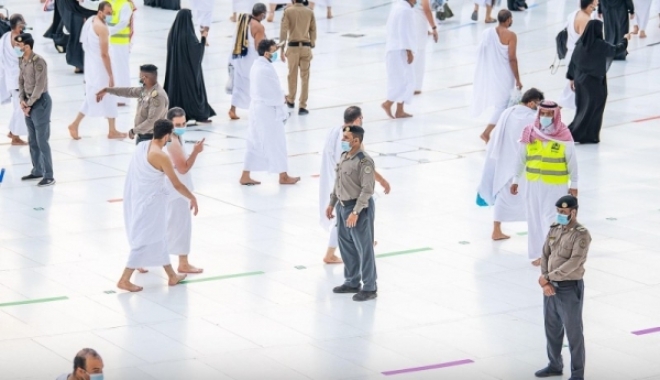 JEDDAH — A special committee has been tasked to organize visitors, worshipers, and Umrah performers to ensure they comply with the mandatory social distancing while entering and leaving the Grand Mosque in Makkah.

On behalf of the General Presidency for the Affairs of the Two Holy Mosques, the General Administration for Crowd Control and Grouping at the Grand Mosque has tasked 750 employees to facilitate Umrah pilgrims carrying out their rites with ease and peace of mind.

In this context, the Director of the General Administration for Crowd Control and Grouping Osama Al-Hujaili said: “Over 750 employees have been allocated to work 24/7 (in shifts) to provide the best services to Umrah pilgrims in the Grand Mosque, and place all capabilities and solutions at their disposal to facilitate performing their rites.”

“The employees and participants in the grouping of Umrah performers have been distributed in the circumambulation area (Mataf), the first floor Mataf, the ground-floor and first floor Mas’aa, King Fahd Expansion, and at the entrances allocated for Umrah pilgrims and worshipers at the Grand Mosque,” Al-Hujaili said.

Al-Hujaili said that the Presidency has mobilized its full operational capacity to serve the Umrah pilgrims during the holy month of Ramadan.

He added: “The whole Mataf (circumambulation area) has been fully allocated for Umrah pilgrims. We call upon Umrah performers to abide by the appointed times for them, as specified in the Eatmarna app, wear medical facemasks, and comply with the mandatory social distancing.”

Al-Hujaili further said: “The shifts have been distributed in a way taking into consideration the expected density. The efforts during the holy month of Ramadan are increased multifold apart from all aspects of joint cooperation so as to provide streamlined integrated services at the Grand Mosque.”

Meanwhile, the Director of the General Administration for Security Affairs Fayiz Al-Harthi confirmed the existence of a special committee for implementing compulsory physical distancing among visitors and Umrah performers while entering and leaving the Grand Mosque.

The committee carries out 24/7 continuous inspection rounds, during the distribution of individual Iftaar meals and after Maghrib prayer.

The objective is to ensure implementation of the precautionary measures and the medical protocols approved by the Ministry of Health to counter coronavirus and create awareness among the visitors to the Grand Mosque on the precautionary health measures, Al-Harthi stressed.