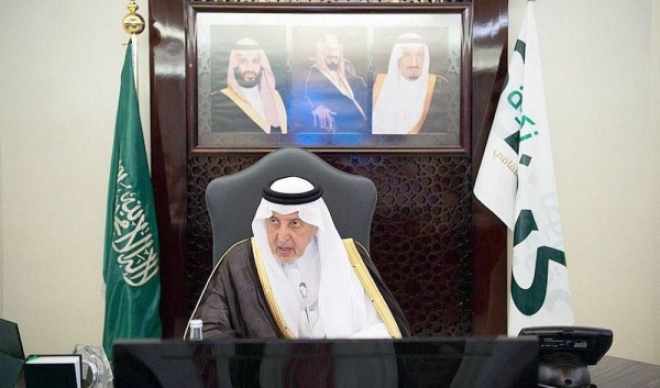 JEDDAH — Prince Khaled Al-Faisal, adviser to the Custodian of the Two Holy Mosques and governor of Makkah Region, who is also chairman of the Central Hajj Committee, chaired the committee’s meeting, which discussed and reviewed the overall plans for this year’s Hajj Season.

The meeting was briefed on the readiness of all pertinent government agencies assigned to provide necessary state-of-the-art facilities and services for pilgrims, coming from inside the country only as per the most recent regulations in view of the repercussions of coronavirus pandemic.

In particular, the committee also discussed the readiness of the four assembly and reception centers as well as the internal transport stations designated for transporting pilgrims to the Grand Mosque in coordination with the relevant authorities.

Meanwhile, the Ministry of Hajj and Umrah stated that the number of pilgrims set to perform Hajj this year will stand at 60,000 domestic pilgrims belonging to 120 nationalities in addition to Saudi citizens from inside the country, adding that the total Hajj applications submitted at the electronic track, exceeded 558,000.

The ministry added that this year's Hajj will witness the implementation of the smart Hajj card which will be used by all pilgrims and workers, allowing cardholders to benefit from a package of services, including entering camps and hotels, and using means of transportation.

The card also contributes in helping to pick up missing pilgrims, as well as re-grouping and guiding crowds.

The meeting reported that the Ministry of Transport has provided 3,000 passenger buses, each capable of transporting 20 pilgrims, accompanied by a leader and a designated guide for each group of 20.

The ministry added that pilgrims would be offered pre-prepared meals that meet the highest quality and food security standards, an unprecedented service during Hajj. — SPA