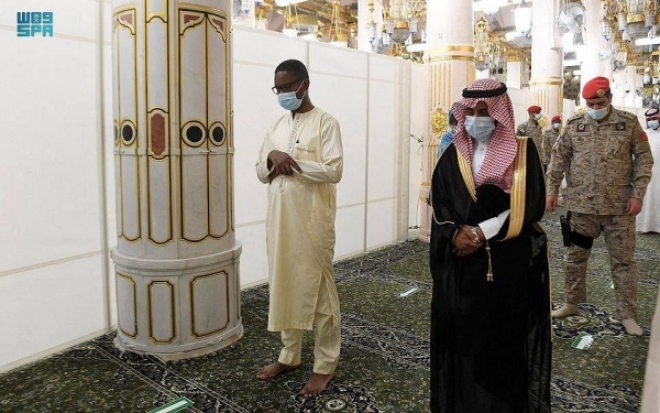 MADINAH — Mauritania's Prime Minister Mohamed Ould Bilal Massoud visited the Prophet’s Mosque in Madinah on Thursday, where he performed prayers and greeted the Prophet (peace be upon him) and his two companions.

Upon his arrival in Madinah, he was received by a number of officials, the Saudi Press Agency reported.

The Mauritanian premier, who is currently on an official visit to Saudi Arabia, arrived in Jeddah on Wednesday evening.

He was received by Prince Saud Bin Abdullah Bin Jalawi, adviser to the governor of Makkah Region and acting governor of Jeddah, and a number of officials upon his arrival at King Abdulaziz International Airport. — SPA


⇐ Previous:
Saudi Arabia to receive as many Umrah pilgrims as per quota granted before COVID-19 outbreak
Next: ⇒
10% of foreign pilgrims housing mandatory for isolation