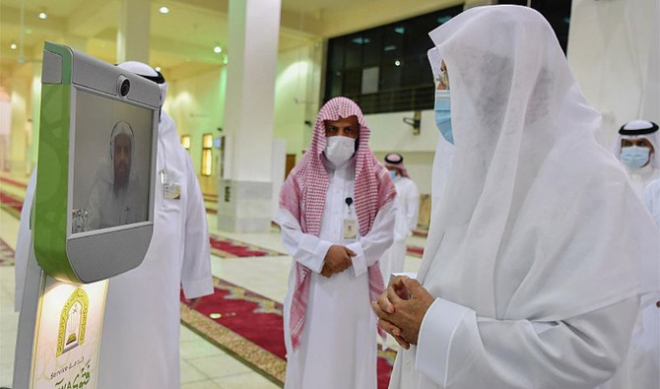 MAKKAH: Smart technology, including a touchscreen robot, is being used to serve visitors to the Grand Mosque in Makkah, the Saudi Press Agency reported.

There is the option of adding instant translation, remote communication with sheikhs, and setting directives in different languages.

The General Presidency for the Affairs of the Two Holy Mosques is using smart technology to develop the level of services it offers.

It has a 21-inch touchscreen that can be used to deal with visitors’ issues of concern, such as guiding and expressing an opinion, and a smart stoppage system that allows it to move easily and flexibly.

The presidency offers the service of Maqra' Al-Haramayn, the Two Holy Mosques Reader, which teaches the Qur'an to Muslims around the world and to Grand Mosque visitors who want to improve their recitation and receive certificates.

The education is remote, with transmission from the Grand Mosque, and is available in six languages including Arabic, English, Urdu, and Hausa.

The presidency has also launched the Smart Qur'an, an e-device for those with visual disabilities so they can read the Qur’an in Braille.