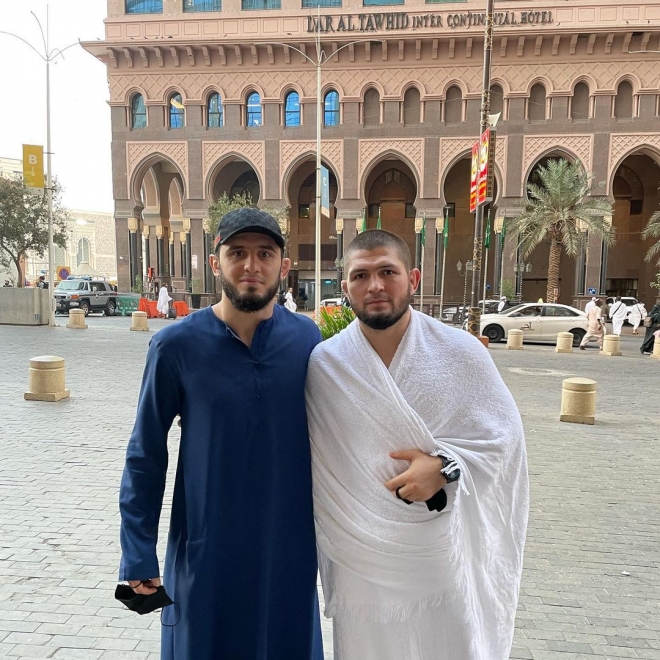 MMA fans sure do know that Khabib Nurmagomedov is religious. His calm demeanor and polite attitude while interacting with fans partly stem from the beliefs he inculcated from childhood. He may have been a world-famous MMA fighter, but he did not let go off his roots.

Khabib has retired and, hence, is able to enjoy a much more peaceful life. He is still closely involved with coaching other Dagestani fighters. However, he does deserve a break. On Instagram, ‘The Eagle’ posted several pictures of him visiting Mecca. He was accompanied by Islam Makhachev and other acquaintances.

In a picture with Makhachev, Khabib was seen in white robes whereas Makhachev was dressed in blue. Both seemed at peace and happy to be there. His posts on Instagram received a lot of love and within just a few hours, were flooded by likes and comments.

The former fighter completed his Hajj pilgrimage in Saudi Arabia, just like other devotees.

Earlier this year too, Khabib had visited the holy place and even wished everyone on ‘Eid’. Incidentally, during his visit, he met Prince Naseem Hamed. Khabib shared a picture with the former British boxer and wrote, “Accidentally met a legend in Mecca. Nice to meet you brother.”

‘Pulled Out of Fights Multiple Times’- Conor McGregor Explains Why Khabib Nurmagomedov is ‘Good, Not Great’

During his Mecca trip in May too, he traveled with several friends and teammates. Since they all share a brotherly bond, this is not surprising at all.

Several UFC fighters have challenged the Russian fighter after his retirement. But Khabib is done with MMA and does not plan to ever return. He is involved with the sport as a coach and is regularly seen training and attending his teammates’ fights.

Khabib’s father was his coach and under his guidance, Khabib managed to achieve what other fighters can only dream of. His undefeated record sets him apart from every other fighter. Hence, he has now taken the role of a coach so that he can help other fighters make their mark and continue the legacy.

With the former UFC lightweight champion as a coach, the younger fighters will definitely benefit a lot. Fans hope to see Khabib attend and support his teammates during their upcoming fights as well.