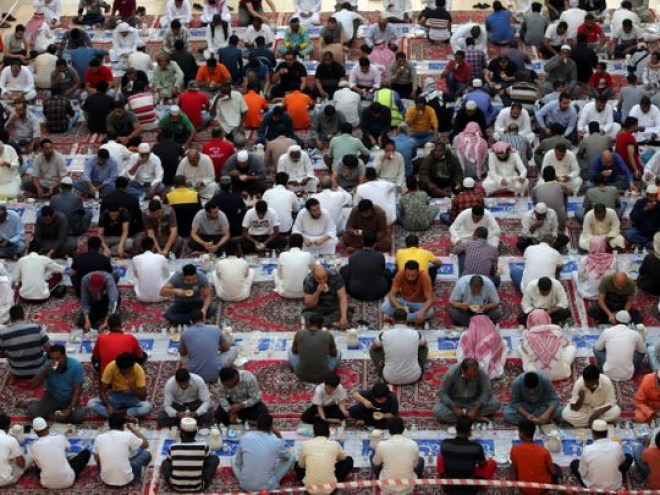 Licensed food providers have served nearly 1.3 million iftar (fast-ending) meals to worshippers at Prophet Mohammed’s Mosque in the Saudi city of Medina during the first 10 days of the Muslim holy month of Ramadan that commenced in early April, Saudi news agency SSPA has reported.

Saudi authorities have recently allowed reintroduction of mass iftar at the sunset in Ramadan at the two holy mosques for the first time in around two years as part of relaxed restrictions against COVID-19 in the kingdom.

The revived tradition is observed under oversight of the General Presidency for Affairs of the Two Holy Mosques in Saudi Arabia.

Employees from competent agencies and volunteers take charge of regulating worshippers’ access to the Prophet Mosque and following up on serving iftar meals as well as clearing up the place for prayers in a short time after the end of the fast-breaking time.

Around 1.2 million bottles of the holy Zamzam water were also distributed to worshippers at the mosque and visitors during the first 10 days of Ramadan, SPA reported. There are, moreover, around 14,000 Zamzam containers installed across the mosque and refilled three times a day to serve the worshippers, it added.

More than 6 million are estimated to have prayed at the mosque during the first 10 days of Ramadan.

Ramadan, which started this year on April 2, is the peak season for performing Umrah or lesser pilgrimage at the Grand Mosque in the Saudi holy city of Mecca and visiting the Prophet Mohammed’s Mosque.

Saudi authorities have recently eased measures for performing Umrah as the kingdom has largely loosened restrictions against COVID-19.

The Ministry of Hajj and Umrah has lifted several precautionary measures including cancellations of permits for praying at the Grand Mosque and visiting the Prophet’s Mohammed Mosque.

The Ministry has also said the immunisation check to enter both holy sites has been scrapped for all worshippers.

The ministry has, moreover, cancelled the once-obligatory registration of immunisation data for overseas Muslims to get an Umrah permit.