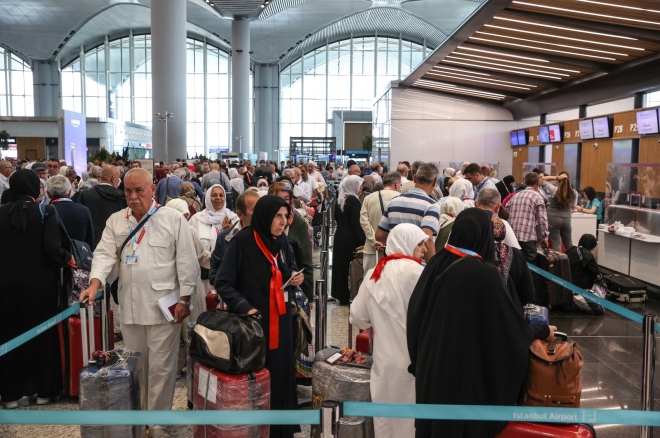 The annual Muslim pilgrimage known as the hajj is an emotional experience for the faithful. This year, it became more so as Turkish would-be pilgrims set out for the journey after two years of disruption.

After a break of two years due to restrictions related to the COVID-19 pandemic, Saudi Arabia opened up for pilgrims from around the world. In Turkey, trips to the country began on Tuesday for prospective pilgrims.

The main gathering point for pilgrims was Istanbul Airport, Turkey’s biggest. Amid tears and hugs, they bid farewell to their families as they boarded flights to Saudi Arabia. Some 286 would-be pilgrims were at the airport on Tuesday for a traditional farewell ceremony. The staff of the local branch of the Presidency of Religious Affairs (Diyanet) recited verses from Quran at the ceremony as Diyanet officials saw off the pilgrims.

Due to quotas imposed by Saudi Arabia, all countries can only send a certain number of pilgrims every year. This year, 37,770 people from Turkey will be at the hajj. They are selected among the hopeful who applied earliest, like Ayfer Gül. Gül had applied for pilgrimage travel a decade ago and was hoping to be picked in the past two years. She was among the victims of COVID-19 and fought the disease for 35 days before recovery. “I was operated on my throat and went through difficult days. But finally, Allah blessed me with this happiness,” she told Anadolu Agency (AA) as she prepared to board her flight.

Saudi Arabia will let up to 1 million people join the hajj pilgrimage this year, greatly expanding the key event to participants from outside the kingdom after two years of tight COVID-19 restrictions. Pilgrims to Mecca this year must be under age 65 and fully vaccinated against the coronavirus, the ministry of hajj and Umrah said in a statement carried by the SPA news agency last month. Participants from abroad will be allowed this year but must present a recent negative COVID-19 polymerase chain reaction (PCR) test, and health precautions will be observed, it said.

Last year, the kingdom limited the annual hajj, one of Islam's five main pillars, to 60,000 domestic participants, compared to the pre-pandemic 2.5 million.

Visits to the holiest sites of Islam in Mecca and Medina for the weeklong hajj, and the lesser, year-round Umrah pilgrimage, previously earned the kingdom about $12 billion a year, according to official data.

The hajj is among the five pillars of Islam, mandatory for every able-bodied Muslim who can afford it. It involves a series of rituals that reach their climax in Qurban Bayram (Eid al-Adha), which will begin in the second week of July this year according to the Islamic calendar.