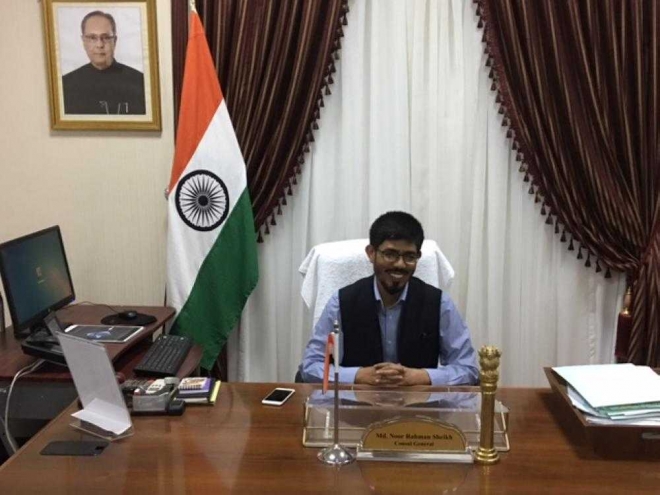 EDDAH — The Indian Haj Mission is gearing up to receive 125,000 pilgrims from 21 embarkation points from all over the country.

Indian Consul General Mohammed Noor Rahman Sheikh said that the first batch of pilgrims will arrive in Madinah on July 24. The Air India flight from Goa will touch down at Prince Muhammad International Airport at 10 a.m. and this will be followed by seven other flights on the same day.

A total of 170,000 Indian pilgrims will perform Haj this year, and these include 45,000 who will come through private tour operators.

In an interview with Saudi Gazette, Sheikh said that the first flight will land in Jeddah on Aug. 7 and those arriving in Jeddah will make Madinah ziyarah after performance of Haj. Pilgrims will return during the period from Sept. 6 to Oct. 6. Saudi Arabian Airlines and Flynas will join Air India in transporting pilgrims.

He said several improvements have been made, in coordination with the Ministry of Minority Affairs and Haj Committee of India, to ensure much better facilities and services for the pilgrims this year.

The consul general said that the Haj Mission has taken steps along with all the stakeholders that all the pilgrims will be accommodated inside the Central Haram Area (Markaziyah) in Madinah. “Last year, 70 percent of pilgrims got accommodation in Markaziyah, and the remaining 30 percent were outside Markaziyah. Pilgrims in both these categories need to pay the same rate, and there were some complaints about this last year.”

He said, this year, it has been decided that if any pilgrim does not get accommodation inside the Markaziyah, the Haj mission will refund the appropriate money to them. “This was for the first time such a refund will be done as we are keen to ensure both justice and comfort to all the pilgrims.”

“Most of the buses were old models and this created many problems. We had requested the Ministry of Haj and Umrah and the Car Syndicate to replace them with new ones,” he said while noting that the Haj Mission has signed agreements with three transport companies including SAPTCO and Al Qaed for arranging mostly 2016-17 model buses and for this the mission needs to pay an additional charge of SR50.

The transportation between Aziziyah and Haram had been improved remarkably last year. “This year, we have decided to further improve this with the signing of agreements with two transport companies of Rabta and Al Qaed, which will operate new brand buses.”

The consul general said that this year an overwhelming majority of pilgrims prefer Aziziyah accommodation. “Out of the total 125,000 Haj Committee pilgrims, nearly 110,000 will stay in Aziziyah. There are 13,000 pilgrims in the Green category while around 2,500 will stay in rubat,” he said, while noting that this year the distance between the accommodation and the Haram in Green has been reduced from 1,500 meters to 1,000 with the rate staying the same.

“In Green, much better buildings have been hired, and we are striving to make arrangements for distribution of food at the lodging as there are no kitchens allowed in Green. We will explore the prospect of finding out any good catering companies willing to open their stores and food supply outlets in our buildings after displaying the rates of food,” he said, adding that the mission will extend all the support and voluntary services apart from getting secured the permission of the local authorities and landlords.

Sheikh said the government of India is sending 50 more medical staff, including 25 doctors, to serve the pilgrims this year. The number of staff from India will be 600 instead of 545 as in the previous years. There will be 33 Muallims instead of 28 Muallims in view of an increase of pilgrims after the lifting of the quota restrictions. There will be one Qadimul Hujjaj for every 200 pilgrims and he will be the link between the Haj Mission and the pilgrims.

“We have ensured that he will always remain connected to the pilgrims with staying in their building and that he should carry the list with the names and essential details of all the pilgrims under him,” he said, adding that the Haj Mission is providing a towel for the pilgrims for the first time this year.