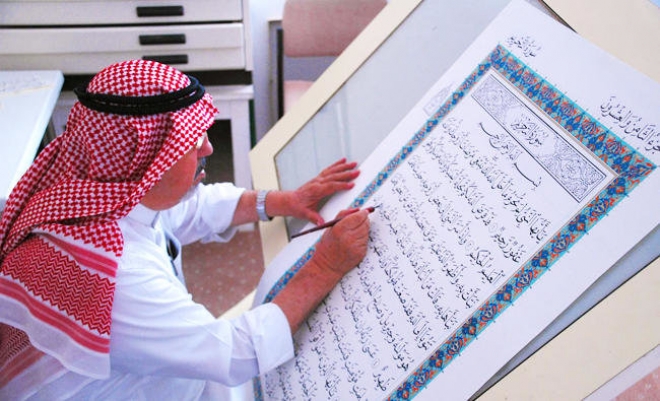 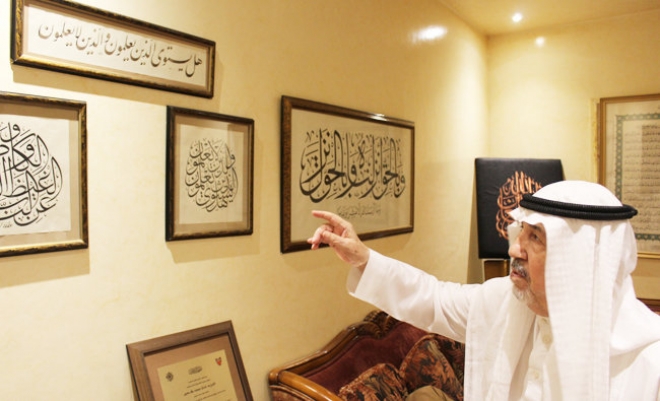 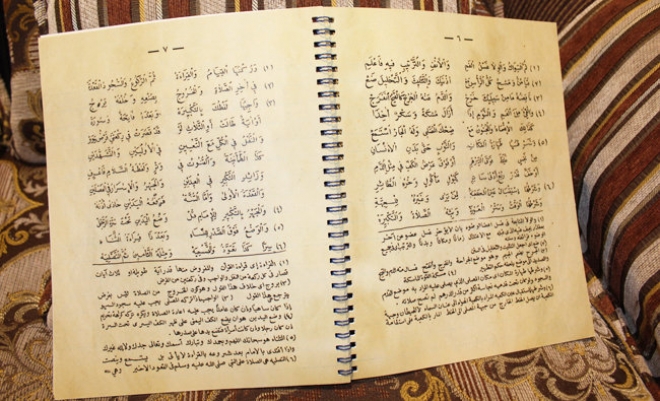 MADINAH: The changes made to the latest Hafs Qur’anic edition did not include using a different script variant (handwriting), but a new theme and new motifs as well as printing it in different sizes, said Uthman Taha, the calligrapher who has written the new edition of the Hafs Mus’haf.

The renowned calligrapher, Uthman Taha, was born in a small village close to the Turkish border in northern Syria to a simple family of farmers, and his father was the village’s imam.

“I developed a passion for calligraphy when, at the age of six, I started to look through my father’s books and see how beautifully their titles were written,” Taha said. “I asked my father about the types of scripts used, but he said it was not his specialty but that of calligraphers in the city.”

“When I became older, my father sent me to Aleppo to complete my education,” he continued, “There, I met some of Aleppo’s famous calligraphers, watched them work, and learned about the tools they used, the way they held their pens, and how they created beautiful alphabets.”

“I then moved to Damascus and met the chief calligrapher in Syria, Muhammad Badawi Al-Diyrani, and the Iraqi calligrapher, Hashim Al-Baghdadi. In Istanbul, I met Hamid Al-Amidi, the master of calligraphers in the Islamic world, who gave me a certificate in calligraphy.”

While Taha studied at the University of Damascus, he was approached by the King Fahd Complex for Printing the Holy Qur’an two years after its establishment. “I was appointed as a calligrapher to write different editions of the Mus’haf for several countries across the Islamic world,” he said.

“Today, five types of scripts are being used — Thuluth, the basic, large script known as the king of scripts, followed by Naskh,” he added.

“I was assigned writing the Mus’haf in different textual variants under the supervision of a specialized committee. It takes almost three years to finish writing one Mus’haf.”

Taha explained that the person who writes the Mus’haf must have memorized the Holy Qur’an and should understand its verses well.

“The first Mus’haf I wrote at the King Fahd Complex 32 years ago was a Warsh edition for Arab countries of the Maghreb,” Taha said, “Of course, we have a revision committee at the complex, led by the imam of the Prophet’s Mosque in Madinah, Ali Al-Hudhaifi, to reread what I write.”

“The Warsh Mus’haf, which I completed in 3 years, is among the rarest editions of the Qur’an in the Islamic world,” he continued. “I have also written six Mus’hafs in different textual variants, which were distributed across the Islamic world. I first wrote the Warsh, then Hafs, and then Duri for Africa and Sudan, and I wrote the Qalun for Libya.”

He also pointed out that many Saudi calligraphers visit him at his house. They come from Riyadh, Jeddah, and Qassim to show him what they’d written. “I try my best to coach them, but I don’t have enough time as I spend most of my day working at the King Fahd Complex,” he said.

“Writing a Mus’haf requires readiness and desire, as well as good knowledge in Qur’anic teachings,” he added, “A calligrapher who wishes to write a Mus’haf must understand the beauty of its every page.”

He also revealed that he holds a PhD and a degree in drawing, and that his youngest son, Ahmed, has his calligraphy and artistic talent.

Taha is currently working on a project to write the Qur’an on a large 600-page panel kept in drawers made especially for Qur’anic manuscripts inside rooms designed to keep them in excellent condition.

He wished the new generation would care more about Arabic calligraphy, and said that the youth in Saudi Arabia were interested in this art. “I wish calligraphy were taught at schools,” he said. “Saudi Arabia takes care of the Holy Qur’an, prints it, and distributes it to all Muslims, so that, today, the King Fahd Complex is considered the best in printing the Holy Qur’an at a global level and has everyone’s respect.”

He also highlighted that, recently, the governor or Madinah, Prince Faisal bin Salman, visited him at his house.