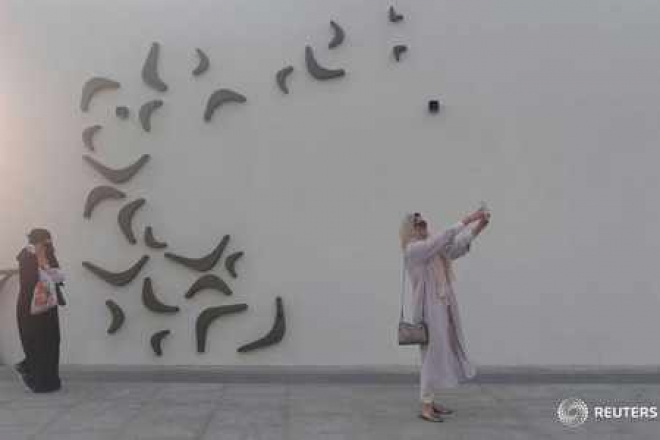 RIYADH - The Government of Jeddah has combined its ancient heritage and its modern advancements through its public and private museums, the Corniche, the historic Jeddah wall, its entertainment and sporting locations, and especially its diving facilities.

The Khuzam Palace Museum, part of the King Abdul Aziz Palace, is one of the city’s most important museums because of its architectural beauty and its being the first building in the city to be built using concrete 85 years ago. It is also where King Abdul Aziz bin Abdul Rahman Al Saud spent part of his working life, as he used it as a diwan, where he received the country’s guests, senior officials and the public. The building represents Jeddah’s architectural heritage from its early period of urban development.

The King Abdul Aziz Palace witnessed the signing of the oil exploration agreement between the Saudi government and Standard Oil of California in 1352 H, as well as agreements to establish diplomatic relations with other countries. The palace contains an office, a majlis and the prayer room of King Abdul Aziz. It was also used by King Saud, after the death of the country’s founder, as his administrative offices until 1384 H, before it became a location for hospitality.

King Abdul Aziz ordered the construction of Jeddah’s first pier at the Al Bant Building. The pier was demolished to make way for the city’s urban expansion and was later moved to its current location.

Souq Al Alawi, which connects the city’s port and Bab Makkah (Makkah Gate), is where pilgrims earlier sailed from, as they were on their way to Makkah. On their return, they entered the city through Bab Makkah and headed to Al Alawi and then to the port, during the days when camel caravans transported pilgrims.

One of Jeddah’s key sites is the 150-year old "Archaeological Biet Nassif Museum," which is located in its historic centre. The 70-year old "Neem Tree" is located in front of the museum. The museum is important, as it was where King Abdul Aziz resided after entering Jeddah. Its hospitable owner, Omar Effendi Nassif, gifted the house to the country after it was reconstructed.

The museum witnessed the signing of the agreement for Jeddah’s handover and many cooperation agreements between King Abdul Aziz and representatives and ambassadors of friendly countries.

Jeddah also has many science museums, such as the University of King Abdulaziz Museum, the Faculty of Marine Sciences and the Faculty of Earth Sciences museums, as well as many private museums, most notably the Al Tayebat City Museum, which is the largest museum in the city, with an area of 10,000-square metres.

The "Darat Safeya Binzagr Museum," which showcases Jeddah’s heritage, customs and traditions, is decorated with paintings, while the "Castle Museum of Arts Heritage" contains archaeological artefacts, traditional clothing and a library, which houses a collection of books, newspapers and old magazines, as well as cassette tapes, records and musical equipment.

The Jeddah Wall, which is one of the city’s key sites, has witnessed the city’s ancient history and the developments of the region. The wall was built between 26 H and 366 H.

The first wall in Jeddah was built in the 4th Hijri century (10 AD), when the city became a centre of power and the protector of Makkah, which continued for some six centuries.

The governorate of Jaddah is characterised by its sea fronts, most notably the Northern Corniche, whose first, second and third phases of construction won the "Great Middle East Projects Awards" in Dubai.

The Middle Corniche, which includes an open museum for aesthetic sculptures, is recorded in the Guinness World Records as the largest open museum in the world. The Jeddah Corniche has a capacity of 120,000 people.

Darb Zubaidah Saudi Arabia has many historic roads that were used by the people of the Arabian Peninsula and neighbouring areas before and after the rise of Islam. Darb Zubaidah (Road of Zubaidah) is the most famous of these roads, due to the surrounding historic sites that are still standing. The road deserves to be registered in the World Heritage List of UNESCO, as part of the ten sites selected by the Saudi Commission for Tourism and National Heritage, based on the approval of the Higher Authorities No. 52984 for 29/12/1435 H.

The road was listed in the "King Abdullah Project for Cultural Heritage Care," which is managed by the commission and is part of the initiatives of the National Transformation Programme.

The road highlights the cultural importance of the exchange of ideas and multi-cultural dialogue between countries, and has served many Muslim pilgrims from all races, and has witnessed religious, cultural and scientific exchanges between peoples from around the world.

Many historians, geographers and travellers wrote about Darb Zubaidah, and historic sources claim that the purpose of the 1,400-kilometre road was to serve pilgrims travelling from Baghdad, the capital of the Abbasside Caliphate, to Makkah, while enriching cultural and commercial exchanges.

The country was the home of many human societies, and is the cradle of divine messages and prophets, and the stage for many events mentioned in the Holy Quran and the Sunnah of Prophet Mohammed, peace be upon him. The date of the first migration of people to the Arabian Peninsula is thought to be some 17,000 years ago, which was caused by a drought throughout the region at that time.

According to historians, the Arabian Peninsula is where most human migrations started from during the Middle Stone Age. Mousterian tools from the stone age were found in Ha'il and Al Jawf . However, the migrants returned to the Arabian Peninsula at the start of the Neolithic period, due to an improvement in the local weather.

Carbon dating analysis of organic samples found in the Arabian Peninsula show that communication between local societies existed during pre-history, or around 2,300 BC, as well as with other communities outside the region.

Research conducted by Sarah bint Faleh Al Dosari for her PhD thesis, entitled, "The Jubbah in Ha’il Area Style of Rock Arts in the Arabian Peninsula: An Analytical Archaeological Study," discussed the "Jubbah" artistic style that was used in pre-historic rock inscriptions in the Arabian Peninsula, and revealed the presence of human activity, such as hunting with bows, arrows, spears, nets and crossbows, which is considered a new discovery, as the oldest crossbow was thought to have been used in China in around 600 BC.

In an interview with WAS, Dr. Al Dosari said that pre-historic humans who lived in Jubbah hunted animals and raised livestock, and evidence of these animals can be found on rocks in Jubbah. However, it is unsure whether humans domesticated animals in Jubbah, or if they were brought to the area after the return of migrants to the Arabian Peninsula, she added.

Al Dosari pointed out that she found many Middle Stone Age locations in Jubbah, while explaining that she photographed rock inscriptions using the global scale approved by the IFRAO. The inscriptions indicated the presence of communities during that time, she added.

Since its announcement on 25th April, 2016, Saudi Arabia Vision 2030 has made the country’s ancient and national heritage a key part of its development strategy, as it is a source of income for the national economy due to the country’s rich historical resources.