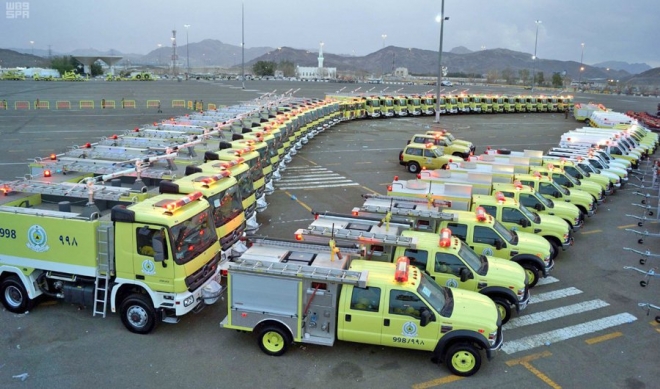 JEDDAH: The General Directorate of Civil Defense on Tuesday revealed that more than 18,000 highly trained personnel, supported by 3,000 vehicles, have been deployed to provide pilgrims with the highest level of safety and deal with any risks or threats they might face during Hajj.

The directorate said forces, stationed at all sacred sites, are ready to carry out its plans for Hajj in cooperation with 32 government bodies. New technology and digital maps of the holy sites have been introduced to make this easier.

The experience gained during previous Hajj seasons provided lessons for the development of units and squads, and the performance of awareness-raising missions, preventive supervision and other civil defense works, the directorate added.

“The first pillar deals with the preventive side, through predicting the emergencies that might occur and adopting the necessary measures to mitigate the potential risks,” he explained. “The second side deals with intervention and confrontation through the field forces that address any event in the appropriate time and place. The third pillar deals with the work that supports all field work and complements all procedures to ensure that pilgrims can perform their rituals with safety and ease.”

Brig. Gen. Hamoud bin Sulaiman Al-Faraj, assistant director of civil defense for Hajj, added that the preparations and plans focus on the prevention and safety, through analysis of data from previous years and geological surveys of problem areas by a committee featuring representatives of all concerned parties.

Brig. Gen. Abdulrahman bin Abdul Hamid Al-Harbi, director of civil defense in Madinah region, said that Prince Faisal bin Salman, head of the Hajj committee in Madinah, has adopted the general plan for civil defense measures in Madinah, in line with the decision of the Minister of Interior, while the Directorate of Civil Defense in Madinah has harnessed all its capabilities to serve pilgrims during their stay in the city.

Brig. Gen. Khalid bin Abdulkarim Al-Awdah, director of civil defense in Mina, said that his forces are working to achieve the overall goal of the planning, which is to ensure safety and reduce risks.

Brig. Gen. Abdullah bin Eid Al-Qurashi, director of civil defense in Makkah, added that it was following a detailed annual plan that includes four main sections, including operational and preventive plans. He said the overall objective was to harness and prepare all materials and human resources, and take appropriate measures to protect pilgrims and citizens from all potential dangers.