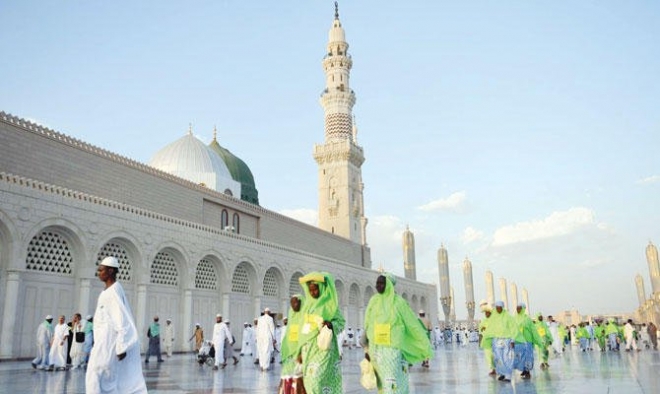 The Prophet’s Mosque is one of the largest mosques in the world and the second holiest site in Islam after the Grand Mosque in Makkah. Located in Madinah, it was built by Prophet Muhammad (peace be upon him) in the year 1 AH (622 AD) near his home after building Quba Mosque (the first mosque in Islam). The mosque was expanded many times over the years, in the reign of the Caliphs and the Umayyad, Abbasid and Ottoman states, and then finally in the span of the Kingdom of Saudi Arabia in 1994 when the largest expansion operation took place. The Prophet’s Mosque is considered to be the first place in the Arabian Peninsula to be lit electrically using lightbulbs in 1327 AH (1909). The original mosque was an open-air building, and served as a community center, a court and a religious school. The mosque is also home to the tomb of Prophet Muhammad (pbuh), and the mosque is a significant Islamic site to pilgrims for its strong affiliation and connection to the life of the Prophet.

Many pilgrims who perform Hajj also travel to Al-Madinah to visit the Prophet’s mosque. Last Ramadan, the Prophet’s Mosque made arrangements to accommodate 10,000 worshippers who performed the ritual of “Itikaaf” (Seclusion and staying in the mosque with the intention of worshipping). Many hotels and local/traditional markets can be found near the mosque. One of the mosque’s most prominent features is the Green Dome; it is built above the prophet’s tomb and the tombs of early Muslim caliphs Abu Bakr As-Siddiq and Omar bin Al-Khattab. The Green Dome is in the south east corner of the Prophet’s Mosque, and was first painted green in 1837, becoming known thereafter as “The Green Dome.”