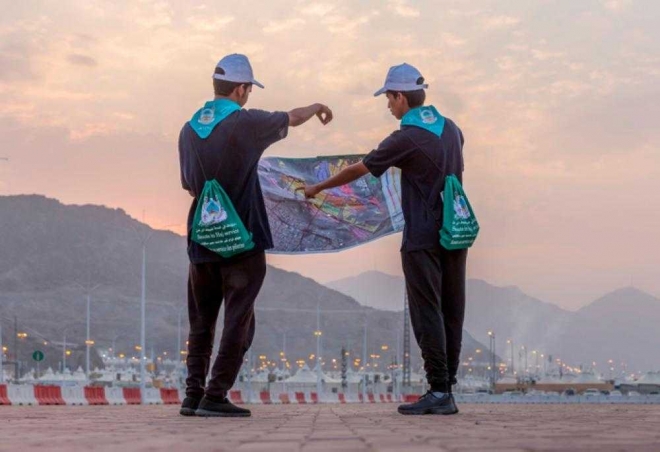 Makkah — More than 4,500 scouts will survey the Mina and Arafat holy sites on Sunday to collect field information about tawafa establishments and camps and acquaint themselves with landmarks so as to guide pilgrims during Haj.

Head of the scout camps Dr. Saleh Bin Rajaa Al-Harbi said the survey will be conducted in three stages.

In the first stage the scouts will survey the plots of land allotted to various tawafa establishments and update the maps of the holy sites as per field information.

In the second stage the scouts will document the gathered information and evaluate the data to compare these with the government and tawafa establishment data.

In the third stage they will finalize guidebooks and maps.

Meanwhile, the Secretariat General of the Council of Senior Scholars will begin their work on Sunday in Makkah for this year’s Haj season.

Their work will include the meetings of the Standing Committee for Fatwas, receiving Haj delegations, answering pilgrims’ questions, distributing flyers to help pilgrims perform their rituals as per the established Sunnah.

Deputy Emir of Makkah Prince Abdullah Bin Bandar, who is also Deputy Chairman of the Central Haj Committee, carried out a field inspection tour to check the services to be provided to pilgrims.

He also inspected the projects carried out by the Makkah Regional Development Authority in the holy sites.

The deputy emir was briefed on the transport plan for this Haj season.

The General Syndicate for Cars has a plan to transport 1.8 million pilgrims aboard 18,400 buses equipped with all facilities.

He also checked the camps spread on an area of 6 million square meters.

So far 1,221,463 pilgrims had arrived till Friday, representing a 7% increase in the number of pilgrims who arrived during the same period last year. This year 70,348 more pilgrims have arrived so far as compared to last year.