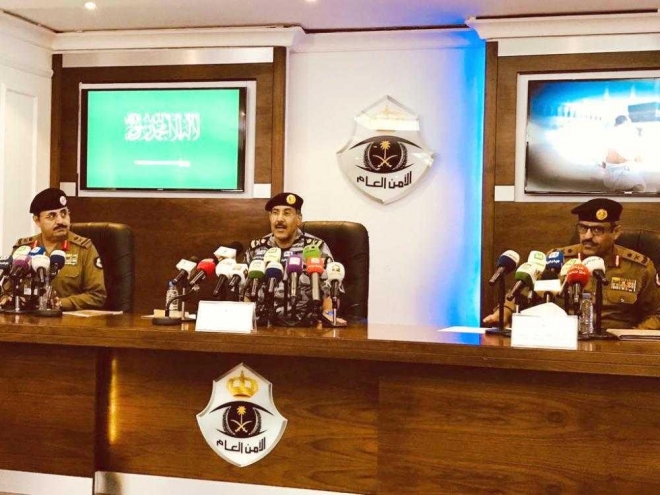 MAKKAH — As many as 72 fraudulent Haj service companies have been caught and 93 people referred to the Public Prosecution for action against them, according to Maj. Gen. Abdullatif Al-Shithri, commander of the passport police in Makkah.

He said 50 units of the passport police were closely watching the Haj companies in Makkah and the holy sites 24 hours a day.

Shiithri revealed this while speaking to reporters at the third joint press conference held by the security forces in Makkah on Saturday.

Maj. Gen Nasser Al-Qahtani, deputy commander of the Haj security forces, said any pilgrim who sleeps within the vicinity of Al-Khaif Mosque in Mina and its plazas or the streets will be caught, fingerprinted and deported if he is a foreigner.

"If the violator a Saudi, the laws will be applied on him or her but if the violators are foreigners they will be deported to their respective home countries immediately after the Haj," he said.

Meanwhile, Fahd Al-Fihaid, undersecretary of the General Authority for Statistics (GaStat) said it would take only about half a minute to estimate the number of the pilgrims arriving in Makkah and the holy sites.

He said the staff of the authority will enter the data of every vehicle entering Makkah with the number of pilgrims carried, their gender and nationality.

"We also receive data about the pilgrims coming from outside from the Department of Passports (Jawazat)," he said.

On the other hand, more than 4,500 Boy Scouts on Sunday began a survey of the holy sites to collect field information about six tawafa establishments and their tents.

Emir of Makkah Prince Khaled Al-Faisal, who is the chairman of the Central Haj Committee, asked for providing smooth and safe transport to the pilgrims.

He asked the transport companies to supply their buses with all required safety tools and technology to ensure easy, smooth and safe transport for the guests of God.

There are 35 transport companies operating as many as 18,400 buses to transport about 1.8 million pilgrims between Makkah, Madinah and the holy sites. The Mashaer Train will transport more than 375,000 pilgrims between Mina, Muzdalifah and Arafat on the actual days of Haj.

The General Syndicate of Cars has established 17 support centers for the buses and 259 mobile workshops for urgent roadside maintenance.

The Ministry of Haj and Umrah has announced that more than 200,000 domestic pilgrims have so far registered to perform Haj this year.

The number of pilgrims who arrived from abroad via air, land and sea have reached 1,302,192, according to statistics released on Saturday.

The Makkah Municipality has employed more than 26,000 workers and supplied them with 717 equipment to clean Makkah and the holy sites during the Haj.

The municipality also constituted teams to supervise more than 33,000 food shops and eateries to make sure the food being provided to the pilgrims is hygienic.

The Ministry of Health, in a statement, said so far there were no epidemics or quarantine cases among the pilgrims.

It described the general health condition of the pilgrims to be stable and reassuring and said as many as 1.2 million pilgrims were vaccinated at various entry points against meningitis, yellow fever and small box.