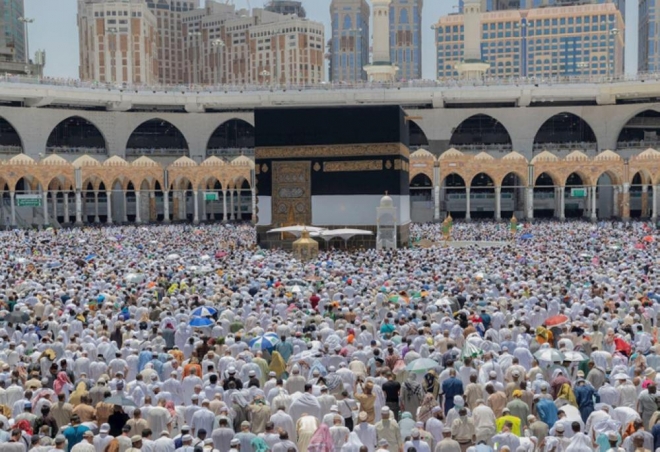 JEDDAH — Around two million pilgrims will start streaming into Mina from Saturday evening, to spend the next day in the vast tent city, marking the beginning of this year’s Haj pilgrimage. The pilgrims, who performed Juma prayer Friday at the Grand Mosque in Makkah and the Prophet’s Mosque in Madinah, made final preparations for their lifetime spiritual journey. All the floors and courtyards and King Abdullah Expansion Project in the Grand Mosque were full of worshipers, and the rows of worshipers spilled over to the streets of the central Haram area. In an unparalleled spiritual ambience, the pilgrims engaged in supplications, seeking the blessing and forgiveness from the Almighty Allah.

Delivering Friday sermons, Sheikh Saud Al-Shuraim at the Grand Mosque and Sheikh Salah Al-Budair at the Prophet’s Mosque, called on the pilgrims to increase their supplications for forgiveness and complete all the mental preparations to perform the rituals in a perfect manner. Al-Shuraim said Haj provides the golden opportunity for the pilgrims to deepen their bonds with their Creator. “One of the benefits of Haj is that it educates how to devote oneself to Almighty Allah, as well as to embrace the values of sincerity and honesty that are devoid of hypocrisy,” he said while emphasizing that peace of mind is the great advantage a pilgrim can acquire from Haj. “A person without peace of mind is like food without salt,” he added. In his sermon, Al-Budair said there is no room for disputes and holding demonstrations in the pilgrimage, which is also not a venue for inciting sectarianism and fanaticism. Tens of thousands of pilgrims left for Makkah after attending Friday prayers in Madinah.

More than 1.7 million foreign pilgrims will join over 200,000 domestic pilgrims to perform Haj this year. The Ministry of Foreign Affairs has issued 1,720,680 Haj visas. Saudi authorities have mobilized all their human and material resources to make the Haj operation a resounding success. Tens of thousands of security personnel have been deployed across the holy sites to ensure safety and security of the pilgrims. Gen. Khaled Al-Harbi, commander of the Haj Security Forces, said all the arrangements are well in place to ensure a smooth and hassle free Haj. During the inspection tour of the holy sites on Friday, he reviewed the preparedness of the security forces taking part in the Haj operation. On Friday, the Civil Defense forces held a mock drill at the holy sites to ensure their preparedness to handle cases related with dangerous substances during Haj.

The pilgrims will set out from Makkah for Mina, retracing the noble tradition of Prophet Muhammad (peace be upon him), to spend the Tarwiyah Day on Sunday in Mina where they will make final preparations for the Standing (wuqoof) at Arafat, which marks the climax of the annual pilgrimage, on Monday.

The Ministry of Health announced that there are no epidemic cases reported among the pilgrims and the overall health condition of the pilgrims is satisfactory. All the hospitals and health centers in Makkah and the holy sites have geared up to provide the best possible health services for the pilgrims. Those who have so far received vaccination and other preventive services from the ministry’s outlets reached 16,47,351 pilgrims. The ministry has equipped all its nine laboratories and eight blood banks at the holy sites in addition to 100 ambulances to serve the pilgrims.

With the tent city ready to receive around two million pilgrims, Haj missions of different countries made finishing touches to their preparations and arrangements so as to enable their pilgrims reach the holy sites on time and perform their rituals in ease and comfort. Pilgrims living in the central Haram area (markaziyah) in Makkah, and Aziziyah will set out for the Mina valley after Isha prayers on Saturday. Most pilgrims will start moving to Mina in buses arranged by tawafa organizations. Almost all the Haj missions have readied a meticulously designed and flawless operation plan for the movement of pilgrims to Arafat after spending Sunday in the tent city, located around 8 km east of the Grand Mosque.