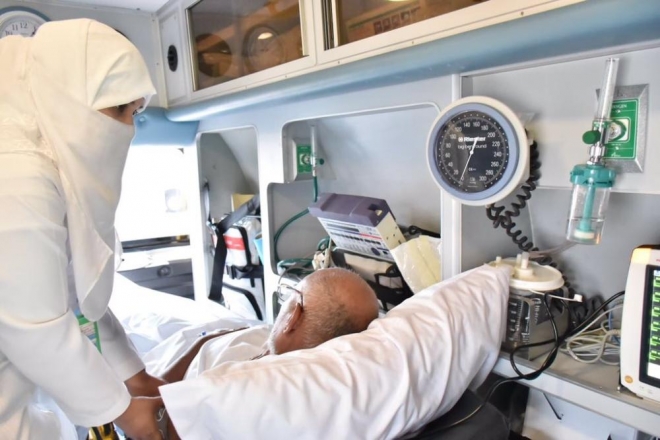 The Ministry of Health has deployed 29,495 health personnel during Haj season to look after pilgrims and its health care plan starts from preventive measure, infection control to responding to emergency conditions besides regular health care such as surgeries, kidney dialyses, and maternity deliveries.

The Kingdom is using helicopters also in emergencies to airlift pilgrims to nearby hospitals during Haj season. The ministry has shifted 23 pilgrims who were not able to move from hospitals in Madinah to Arafat in convoy of ambulances.

“The medical attention provided by Saudi Arabia is excellent, though we were tense when my daughter in-law developed sudden labor pain, however, she was able to give birth to her baby girl in normal condition in the hospital in Makkah”, said Mohammed Ayub Khan, a retired police officer of Delhi Police.

A native of Nuhu district of Mewat region of Haryana in India, Ayub Khan, along with his family including his 24 years old daughter-in-law are here for Haj. “The health care towards pilgrims is commendable,” said Ayub Khan.

There are eight more such women pilgrims who delivered their babies during their stay in holy cities, according to Health Ministry.

In another case, 54-year-old Pakistan pilgrim, who previously had cardiac surgery in Pakistan, suddenly developed heart problem when he arrived in Kingdom. His condition was deteriorating when he was hospitalized. He was diagnosed with blockages in two of his three heart arteries, that developed clot and blocked blood and oxygen to his body.

King Abdullah Medical City performed the critical surgery to the patient; and an artificial artery system was implanted to the pilgrim.

Since the Haj season began, the ministry has conducted 10 open heart surgeries and other 197 cardiac operations, 500 major and minor surgeries besides 1,300 kidney dialyses.

This year the ministry has deployed a mobile hospital with 8 beds in Arafat for first time to deal with urgent cases on the spot itself until referral arrangements completed.