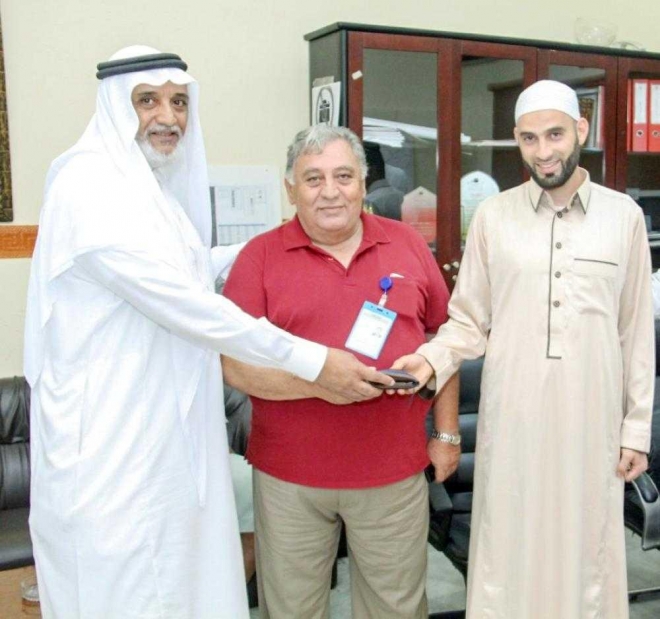 MAKKAH — A pilgrim from Azerbaijan who stepped on a purse while he was doing tawaf (circumambulation) around the Kaaba. He immediately took it, opened it and started making calls on the mobile number he found in the purse.

The lost purse contained cash money in Euros and Saudi riyals and a number of credit cards.

The Azerbaijani pilgrim, whose name is Abdullah, called the mobile phones in France but there was not answer. He then called a landline, which was answered by a relative of the France pilgrim whose name is Ibn Zarouq.

The relative called the wife of the French pilgrim in a third country and on her part, the wife called one of the pilgrims who was a friend and a companion of her husband in the Haj. She asked him to tell her husband that the lost purse was found and was with a pilgrim from Azerbaijan.

Abdullah immediately contacted the tawafa establishment for the European, American and Turkish pilgrims and asked them to help him reach the French pilgrim. Through its data base, the establishment was able to each Ibn Zarouq and asked him, to come and collect his purse.

The French pilgrim never expected to get his purse back, especially after it was lost in the Grand Mosque during the first days of the pilgrimage.

Abdullah recalled that when he first performed the Haj in 1974, he lost his purse which was found by the Haram security forces and returned to him in a short time. "I have now repaid my 44 years old debt," he said.

The French pilgrim said he faced a difficult time since his purse, containing important papers, was lost and he spent all his time praying to Allah hoping to find it.