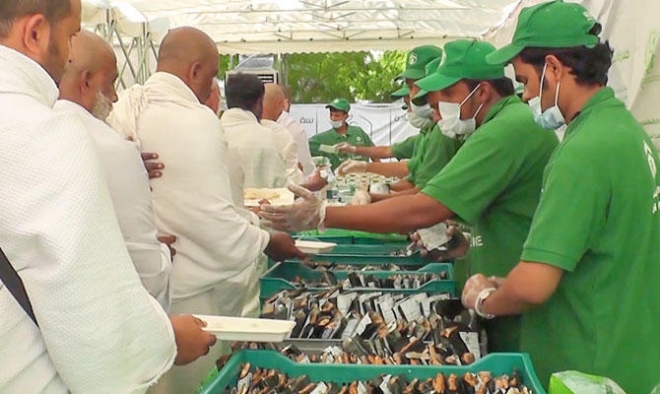 JEDDAH: Saudi Arabia’s Hajj Ministry has put health at the top of its menu with plans to supply more than 2.3 million hygienic meals to pilgrims.

The ready-made, sterilized meals come in a range of flavors and will be provided to 15 percent of the pilgrims as part of the ministry’s health and safety program for pilgrims.

“The door is open for all competent companies to invest in this big project. It is no secret that we are in talks with Saudi Airlines Catering to take part in this service. We want the pilgrims to enjoy as high-quality food as that offered to passengers on our national carrier,” he said.

“From this year South Asian Hajj offices will start to distribute sterilized meals to 15 percent of the pilgrims. In almost two years’ time, all pilgrims will enjoy similar meals during their Hajj days.”

Bentin said the move is in line with the Saudi government’s wish to ensure safe food sources for pilgrims.

The minister said that the Kingdom’s leadership told all ministries to work toward making the pilgrims feel not only satisfied but also happy.

Project Supervisor Dr. Bassam H. Mashat said the Kingdom will supply pilgrims with the safest possible food during their pilgrimage.

Mashat, an associate professor at the Custodian of the Two Holy Mosques Institute for Hajj and Umrah Research, said that they want the pilgrims to enjoy as high-quality food as that offered to passengers on our national carrier.

“Taj Food factory is the first ready-to-eat food factory of its kind in the Kingdom. The plant, located in Jeddah, is designed to meet the requirements of Food Safety Management System, a risk management system that identifies, evaluates and controls hazards related to food safety,” he said.

A prototype plant had been installed in Makkah, the company’s headquarters, where quality tests were conducted to ensure the highest level of production.

The factory is over 9,000 square meters in size and can house up to nine production lines.

“These production lines can produce more than 12 million meals per year. The pool of talents comprises Saudi-trained teams and experts from Malaysia, who have been cooperating to establish this factory, which meets global standards for food safety in both the Good Manufacturing Practice and the International Organization for Standardization,” Mashat said.

Prepackaged meals are ideal for pilgrims in regard to cooking quality, storage and even transporting from one place to another.

“They can also be a good food solution for factories, schools and universities,” he said.

A variety of meals is produced, each served in heavy-duty sealed pouches or trays. “The production process ensures a clean and easy-to-prepare range of tastes that suit all cultures,” he said. Saudi team members worked with international manufacturers to set up the food production operation.

The ministry’s initiative has a number of benefits, including reducing fires in the holy places caused by pilgrims’ camp kitchens, cutting the risk of food poisoning and greatly lowering water use in camp kitchens.


⇐ Previous:
A journey to Hajj that changed Islam in America
Next: ⇒
Azerbaijani pilgrim returns a lost purse to its French owner