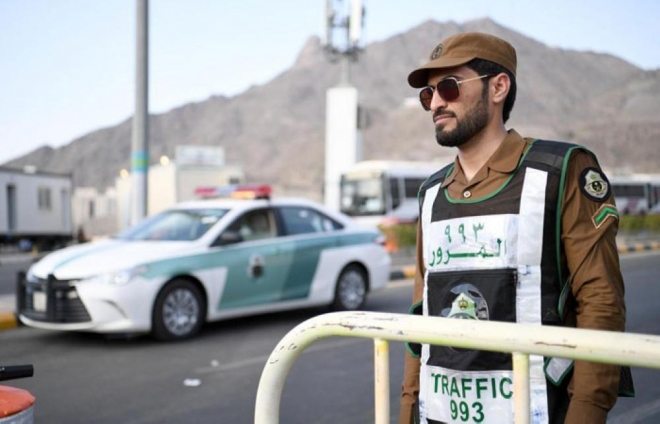 MAKKAH — More than two million pilgrims have converged in Mina on Sunday on their way to Arafat, the climax of the Haj, on Monday. The Kingdom considers their safety, security and well being a top priority and a red line that should not be crossed.

"We are mainly concerned with the comfort and security of all the pilgrims without any distinctions or disparities," said Saudi chief of army staff, Gen. Fayyad bin Hamid Al-Ruwaili.

He said the standing instructions of the Saudi leadership are that we should ensure the pilgrims with the best of services and provide them with complete comfort and security.

Ruwaili who inspected the armed forces participating in the Haj to check their readiness, said, since its establishment, the Kingdom has been deploying all its resources and potentials for the service of the guests of God.

According to the security spokesman of the Interior Ministry, Maj. Gen. Mansour Al-Turki more than two million pilgrims are performing Haj this year including about 240,000 domestic pilgrims.

He said the General Authority for Statistics (GaStat) will officially announce the exact number of the pilgrims on Tuesday, the Eid Al-Adha day.

He said about 500,000 pilgrims have arrived in Mina on foot while the rest came on buses.

Spokesman of the Haj security forces, Col. Sami Al-Shuwairekh said 126 phony Haj offices were netted and their funds confiscated. "We have reimbursed the money to the deceived pilgrims and will take the fake offices to the courts," he said.

Spokesman of the Health Ministry Mishaal Al-Robaian, said the ministry has prepared 25 general hospitals and 155 health centers with a capacity of more than 5,000 beds for the pilgrims in Makkah and the holy sites.

He said the ministry has deployed about 30,000 health cadres consisting of doctors, pharmacists, nurses, technicians and administrators to serve the pilgrims.

He said the ministry also has a mobile field hospital, which has eight beds, six for admission and two for the intensive care unit. The spokesman said the hospital can easily move among various areas in the holy sites and is especially serving the areas which are far away from the health facilities.

Spokesman of the MInistry of Haj and Umrah Hatim Qadi, said about 750,000 pilgrims in Madinah were transported to Makkah on 21,000 buses which passed through the Miqat mosque to put on their ihrams so as to do the tawaf al-Ifada on their arrival in the grand Mosque.

Meanwhile, Sheikh Abdul Rahman Al-Sudais, chief of the Presidency of the Affairs of the Two Holy Mosques, said the mataf area in the Grand Mosque will be used only by people doing tawaf (circumambulation) not for prayer so as to provide enough space for the pilgrims to do their tawaf easily.

He asked the pilgrims to pray in other areas of the Grand Mosque.

The GaStat said about 107,000 pilgrims do their tawaf around the Kaaba every hour while there are more than 278,000 pilgrims who pray in the Grand Mosque every hour.

The authority said as much as 2,000 cubic tons of Zamzam water is poured into the Grand Mosque every day while 300 tons are poured in the Prophet's Mosque in Madinah.

According to the presidency, there are about 20 muezzins who raise the Adhan in the Grand Mosque and 10 imams to lead prayers.

The Ministry of Islamic Affairs, Call and Guidance, on its part, said it has grouped about 5,300 pilgrims, who are the guests of the Custodian of the Two Holy Mosques King Salman, from Makkah to Mina on board modern buses, special cars and ambulances for the pilgrims of special needs.

The ministry said the King's guests are hailing from 94 countries in the world.