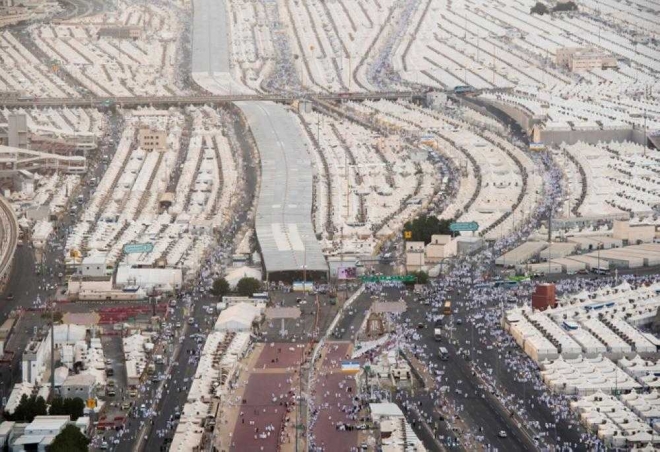 MAKKAH — More than two million pilgrims from around the globe started their Haj pilgrimage on Sunday with their convergence in Mina in preparation for their ascendance to Arafat, for the most important ritual of Haj on Monday. After sunrise, chanting “Labbaik Allahumma Labbaik (O God, here I am answering Your call), the white sea of humanity surge toward the vast plains of Arafat, about 15 km east of Makkah, at the climax of this year’s annual pilgrimage after spending a night of meditation and introspection in the tent city.

The ritual of standing at Arafat will begin Monday afternoon. After listening to the Arafat sermon to be delivered at Namira Mosque, they will perform the Dhuhr and Asr prayers together in the shortened form. The pilgrims will spend the time in Arafat with prayers for acceptance of their pilgrimage and recitation of Qur’anic verses until sunset. After sunset, pilgrims head to Muzdalifah, halfway between Arafat and Mina, where they stay at least until midnight, engaged in prayers after performing Maghreb and Isha prayers combined.

Prince Khaled Al-Faisal, emir of Makkah and advisor to Custodian of the Two Holy Mosques and chairman of the Central Haj Committee, arrived in Mina on Sunday to closely follow the smooth flow of the pilgrims and review the services and facilities being rendered to them. Addressing a press conference, he said that a total of 1,999,496 pilgrims arrived to perform Haj this year. These included 1,758,722 foreign pilgrims and 240,747 domestic pilgrims. There are more than 86,000 Iranians and over 300 Qataris among the pilgrims.

Prince Khaled said that 160 fake Haj operators were caught and 545,907 violators of the Haj and Umrah regulations were arrested. A total of 231,911 vehicles have been sent back for transporting illegal pilgrims. He said the convergence of pilgrims in Mina was complete and some of the pilgrims reached Arafat by Sunday evening.

In a cable of greetings, Minister of Interior and Chairman of the Supreme Haj Committee Prince Abdul Aziz Bin Saud Bin Naif congratulated Custodian of the Two Holy Mosques King Salman on the successful completion of the movement of pilgrims to Mina. The minister said the pilgrims have benefited from the host of services and facilities made available at their disposal as per the Kingdom’s Vision 2030, citing the implementation of ‘Makkah Road’ as one of its initiatives by which pilgrims can finalize entry procedures at the point of departure.

Almost all the pilgrims have reached the vast tent city by buses and on foot through the roads, tunnels and bridges from Makkah by Sunday afternoon. Many in the sea of white-clad believers were so moved by the occasion that tears streamed down their faces as they set out from Makkah for Mina.

“It’s the dream of every Muslim to come here to Makkah,” according to Frenchman Soliman Ben Mohri. “It’s the ultimate journey. What worries me is the return to my normal life. For the moment, I am in a dream,” the 53-year old Mohri said.

Thousands of buses and vehicles carrying the pilgrims lined the 8 km road from Makkah to Mina. Many pilgrims made the journey walking under the scorching sun, some carrying white or blue umbrellas.

The pilgrims performed obligatory prayers of Dhuhr, Asr, Magrib and Isha in shortened form following the tradition of Prophet Muhammad (peace be upon him) and engaged in supplications and reciting the Holy Qur’an. There were no incidents reported from any corners of the tent city while the vast plains of Arafat experienced mild sandstorm and rain on Sunday evening.

The Tent City reverberated with the talbiyah of pilgrims who made final preparations for their standing (wuqoof) at Arafat. Almost all the Haj missions have readied a meticulously designed and flawless operation plan for the movement of pilgrims to Arafat.

Saudi authorities have mobilized all their human and material resources to make the pilgrimage hassle-free and a great success. An integrated security team of more than 100,000 personnel drawn from all the branches of the Ministry of Interior has been deployed across the holy sites to ensure safety and security of the pilgrims. Pilgrims faced little difficulty getting into Mina where hundreds of security forces are manning bridges, roads and underpasses.