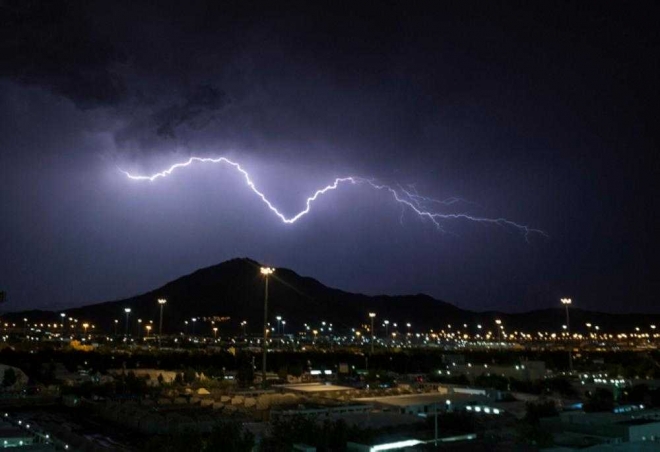 MINA — Dust storm accompanied by moderate rain was experienced in Arafat on Sunday evening. The holy site would likely witness extreme temperature and high humidity on Monday, the day of standing at Arafat, the main pillar of the annual pilgrimage of Haj.

According to the forecast of the General Authority for Meteorology and Environment Protection, sandstorm and rain are likely to hit the holy sites and Makkah until Monday evening.

Hussain Al-Qahtani, spokesman of the authority, said that the climatic fluctuations that took place today will continue up to tomorrow evening due to high temperatures and high humidity rates that would reach its peak in the afternoon.

The area is likely to experience 43 degree of temperature while humidity would reach 65 percent in addition to the fall in the visibility to 7 k.m.

Meanwhile, Col. Muhammad Al-Qamash, spokesman of the Civil Defense Directorate, said that Sunday’s sandstorm in Arafat did not affect the safety of pilgrims. “There were slight damages to a limited number of tents and they have been restored to the normal state. The overall situation at the holy sites is stable,” he said while urging pilgrims to follow safety instructions that have been issued by the authorities. — SG/SPA