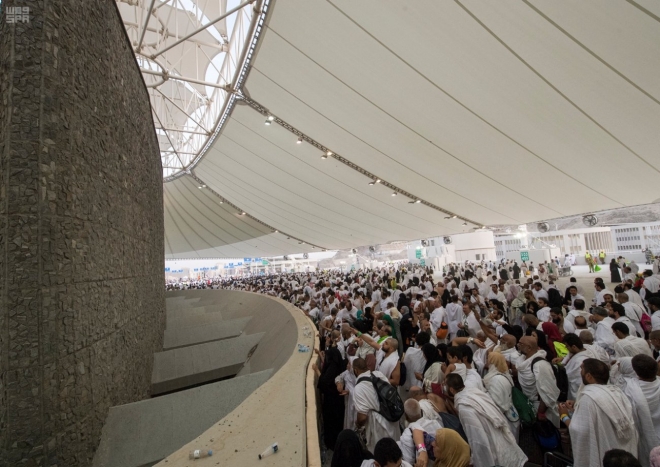 MAKKAH: Muslims celebrated the first day of Eid Al-Adha on Tuesday, which marks the closing parts of the Hajj pilgrimage.

The massive crowds had spent the previous night camped out in Muzdalifah, having performed the most important of the Hajj rituals, visiting mount Arafat, where they believe the Prophet Muhammad gave his last sermon.

They had also endured poor weather conditions, which ranged from the intense heat of the summer sun, rain and sandstorms.

Millions of pilgrims gathered at Mount Arafat on Monday. (AFP)

On Tuesday, clad in white robes, shaded only by umbrellas, the 2.4 million pilgrims from 165 countries walked to the complex at Jamarat to throw pebbles at three columns.

It is here that Muslims believe the devil tried to talk the Prophet Ibrahim out of submitting to God’s will.

Muslims believe Ibrahim's faith was tested when God commanded him to sacrifice his only son Ismail.

“The Feast of Sacrifice”

The pilgrims perform the stoning ritual, where they gather at three pillars that represent the Devil.

They throw three stones, each bringing them closer to God as they repent the Devil.

The stoning ritual area is on a multi-level structure that surrounds the pillars with a walkway to and away the site to ensure the safety of the millions of pilgrims.

The final days of Hajj coincide with the Eid al-Adha holiday, or "Feast of Sacrifice."

They traditionally slaughter sheep for the three-day festival, a tribute to the Prophet Ibrahim’s sacrifice of a lamb after God spared Ishmael, his son.

They will consume some of the meat and give the rest to poor people unable to buy food.

The Saudi authorities have deployed more than 130,000 security forces and medics as well as modern technology including surveillance drones to maintain order.

“The police assistance and the services were all extraordinary. Praise God, I am very happy and God willing our Lord will provide for us again,” said Jordanian Firas Al-Khashani, 33.

The once in a lifetime pilgrimage last five days and sees people travel from all over the world and while the intense heat and vast crowds might seem testing to many, the pilgrims seem to bask in that same test of faith.

“It is a beautiful feeling,” said Egyptian Hazem Darweesk, 31. “The beauty of it is in the difficulty of performing it. It brings you closer to God.”

King Salman arrived in Mina, east of Makkah, on Monday evening ahead of Eid Al-Adha, or the feast of sacrifice.

King Salman arrived in on Monday, he said it was a privilage for Saudi Arabia to serve the pilgrimage. (SPA)