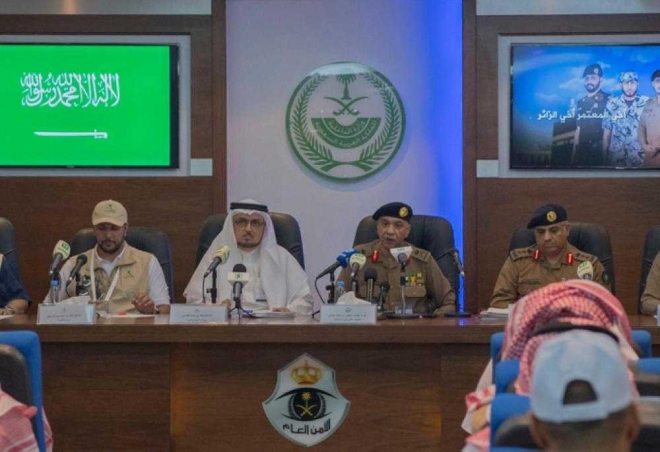 MINA – Maj. Gen. Mansour Al-Turki, security spokesman at the Minister of Interior, praised the Haj pilgrims for their compliance to the crowd management regulations that contributed to the smooth conduct of stoning ritual at Jamarat on Tuesday.

“The role of pilgrims is very important in the success of the crowd management measures taken by the authorities. This is one of the major factors for the smooth and hassle-free Haj operation and the positive outcome achieved so far,” he said while addressing a press conference in Mina on Tuesday.

Al-Turki thanked Custodian of the Two Holy Mosques King Salman and Crown Prince Muhammad Bin Salman, deputy premier and minister of defense, for their keenness in ensuring maximum comfort for the pilgrims.

Mishal Al-Robaian, spokesman of the Ministry of Health, said that there were 28 sunstroke cases and 143 exhaustion cases were reported among the pilgrims. Col. Sami Al-Shuwairekh, assistant commander of the Haj Security Forces, said that as many as 192 fake Haj firms were apprehended up to Tuesday morning. He said that a total of 926,686 people without a Haj permit and 253,457 vehicles transporting them were sent back from various entry points to Makkah and the holy sites.

Meanwhile, the General Directorate of Passports has issued 38 administrative decisions against citizens and expatriates who transported pilgrims without a permit. Sentences against the violators included imprisonment, financial fines, deportation of the offending expatriates, defamation and the call for confiscation of the means of transport used in the violation.