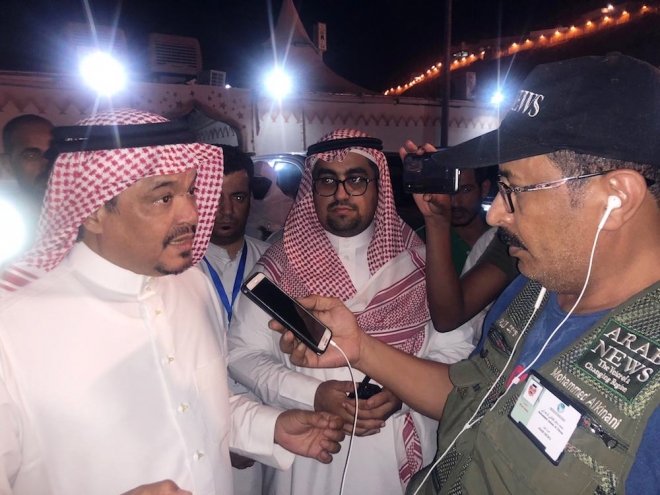 MINA: The holy sites will undergo a fundamental facelift in the near future, Saudi Arabia's Hajj minister said in an exclusive interview with Arab News.

“There is a comprehensive, integrated plan to develop the Mina, Muzdalifah and Arafat altogether,” Mohammed bin Saleh Banten said.

“We now know that there is a royal commission, chaired by Crown Prince Mohammed bin Salman, for Makkah and the holy sites. This massive project will see more services for pilgrims and increased capacity, safety and security to ease their Hajj performance,” he said.

The minister said that the Custodian of the Two Holy Mosques “is always directing us to provide pilgrims with the finest and best services.”

Development is never-ending, but “when it comes to a major absorptive capacity change, it takes time. However, we all believe in our message and are working to achieve our goals,” he added.

He confirmed that this year’s Hajj was going as planned and was living up to pilgrims’ expectations.

“Performance indicators are usually analyzed in the end of every Hajj season, but I can tell you that the movement of pilgrims from Arafat to Mina saw record numbers,” he said.

“The big efforts made by the ministry’s committee assigned to transport pilgrims to Arafat — security men, Tawafa establishments and organizing bodies — have cooperatively made the process a success.”

Banten said that he had extensive knowledge and a wide experience in Hajj works, but had never witnessed such a successful collective work.

— Arab News (@arabnews) August 22, 2018 “We are so delighted with what has been achieved. The performance statistics for the movement of the pilgrims from Arafat to Mina, which we reported today, were very positive. As for transportation, the number of vehicles that had problems was negligible,” the minister said.

The arrival of pilgrims to their destinations was much more accurate, thanks to efforts by all related bodies.

“Modern technology has also contributed to this success. All buses are equipped with the latest technology to guide them to the correct locations. As for grouping the pilgrims, we have also set up precise plans to make sure that pilgrims can safely get to their endpoints,” the minister said.

He added their plans will hopefully ensure a secure a safe stoning of Jamarat and a secure exit of Mina. The minister said all that has been done was a result of cooperation of government sectors.

Banten said that public security officials have prepared plans to ensure pilgrims carry out the stoning peacefully and safely.

“Security men, as you see, are doing a great job in managing the crowds and organizing traffic. The train is working efficiently to transport the pilgrims. Having taken heat and sunstroke into consideration, we have covered most of the pathways in Mina to protect the pilgrims,” he said.

Medical centers, in addition to volunteering centers, have been organized to provide medical assistance for such cases.

In spite of the efforts of the ministry, there had been a few remarks about their plans in the coming season.

“Actually, no man’s work is perfect. There should always be some remarks, but these can either be corrected without delay or taken for comprehensive, thorough studies. However, we make sure that performance remarks, that we ourselves make, receive from pilgrims or that the Command and Control Center inform us about are all recorded and will be taken into account to see how to prevent their occurrence in the future,” the Hajj minister told Arab News.