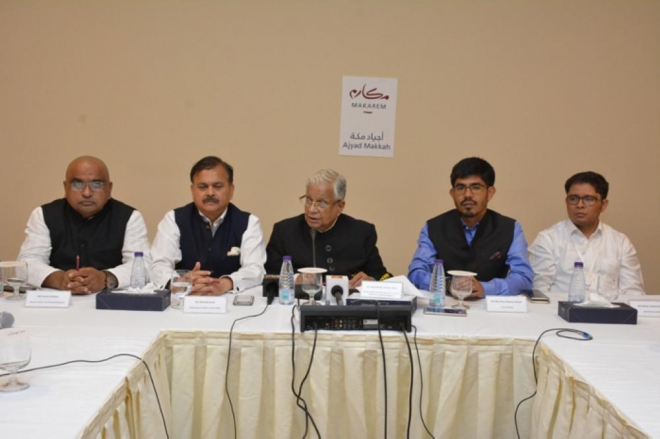 Addressing a press conference here on Wednesday, Dr. Syed Mohammad Ammar Rizvi, former acting chief minister of Uttar Pradesh state and head of the delegation, said that the Indian Haj mission has made qualitative leap in the services and facilities provided to more than 175,000 pilgrims, who make up the third largest contingent of foreign pilgrims, coming next to Indonesia and Pakistan.

Rizvi said that the government of India attaches utmost significance to the annual pilgrimage of Haj and hence it makes every possible effort to provide the best possible services for Hajis to accomplish their once in a lifetime spiritual journey.

He thanked the Saudi authorities for enhancing the quota for Indian pilgrims for the Haj of 2018. “Out of the total quota of 1,75,025, which is the largest ever given to India so far, 1,28,702 pilgrims came through the Haj Committee of India and the remaining 46,323 through the private tour operators,” he said.

Rizvi hinted that there could be an increase in the number of Haj officials, including medical staff, accompanying pilgrims in the coming year. This year, the government has sent around 600 on deputation, including doctors and paramedics, to serve the pilgrims, he said highlighting that these officials included 97 women with a senior woman official as their coordinator.

“For the first time, a total of 1,171 women pilgrims, who came without a male Mahram (blood relative), performed Haj this year. A separate branch office and dispensary manned by lady officials have also been set up to provide assistance to them,” he said.

The Indian government delegates commended the Haj mission for providing high tech services and facilities for the pilgrims. “Indian Haji Information System” App, which was developed by the consulate in 2014, has been further enhanced to include a feature of locating respective camps in Mina for the pilgrims.

Besides, other facilities in the App have significantly enhanced the quality of welfare services. They also noted that an online OPD System, titled “e-MASIHA” (Medical Assistance System for Indian Hajis Abroad) has been developed for the first time this year and that is in the line with the Digital India Program.

“The system provides online registration of pilgrims seeking medical facility. Through this system, the health record of pilgrims can be retrieved so as to assist in regular check up and follow up of sick pilgrims as well as maintaining the proper database,” Rizvi said while commending Saudi Minister of Haj and Umrah Muhammad Benten for streamlining the excellent arrangements with the support of the highly advanced technology and that helped in further enhancing the ease and comfort of Indian pilgrims.