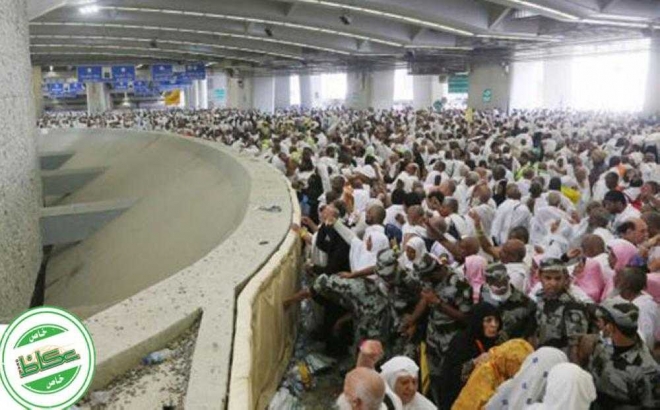 MINA — On Wednesday, the first of the three Tashriq days, more than 2.3 million pilgrims continued to throw stones at the Satan replica and proceeding from the Jamarat area to the Grand Mosque in Makkah to do tawaf Al-Ifada.

The pilgrims, on Tuesday, the Eid Al-Adha day, slaughtered their sacrificial animals, pebbled the Jamarat Al-Aqaba with seven stones each, shaved off their hair and changed into plain clothes.

Every pilgrim will be stoning the three replicas with a total of 21 stones, seven for each, and will repeat the same ritual the next day (Thursday).

The pilgrims will have to leave Mina for Makkah before sunset on Thursday if they are in a hurry otherwise they will have to complete their stay for three days in Mina on Friday before their Haj is officially over.

Meanwhile, the Ministry of Interior has announced that as many as 192 phony Haj offices were nabbed and their owners will be tried.

The ministry warned the pilgrims against falling prey to these offices, which will only embezzle their funds without giving them any service in return.

The ministry also said more than 900,000 irregular pilgrims were returned from the various entry points to Makkah and the holy sites in addition to 253,000 vehicles.

On the other hand, the Ministry of Health has established 16 health centers in the Jamarat area to provide health care to the stone throwers.

The health centers in Mina on Tuesday received and treated as many as 9,755 pilgrims.

The ministry has employed about 30,000 medical cadres consisting of doctors, pharmacists, nurses, technicians and administrators. They work in about 25 hospitals in Makkah and the holy sites.

The ministry also has 135 mobile and permanent health centers, which, together with the hospitals, have a combined capacity of 5,000 beds.

The Islamic Development Bank, which is supervising the Kingdom's Sacrificial Meat Project, expected the pilgrims to slaughter about a million sheep this year and said the meat will be distributed among the poor people in the Haram, the welfare organizations in the Kingdom and the poor Muslims in 25 countries around the world.

The bank has employed as many 8,500 butchers and more than 800 veterinarians to check the animals before slaughter.

The bank has employed about 40,000 people to work in the project of whom about 20,000 were recruited from outside.

Meanwhile, for the first time in 14 years, there will not be any Saudi barber in Mina in this year's Haj. The municipality, which has 1,110 barber chairs in Mina, used to supply the Saudi barbers with furnished salons in the Jamarat area provide them with chairs, razor blades, towels, shaving creams and other equipment.

There is no mystery behind the absence of the Saudi barbers from the scene in Mina. The reason is simply that there are not enough quantities of them.

Director of the secondary industrial institute in Makkah, Safar Saleh Al-Ghamdi said the barber section the institute was closed down due to lack of students.

He said in the past, a number of the students used to work as barber in Mina to get more training.