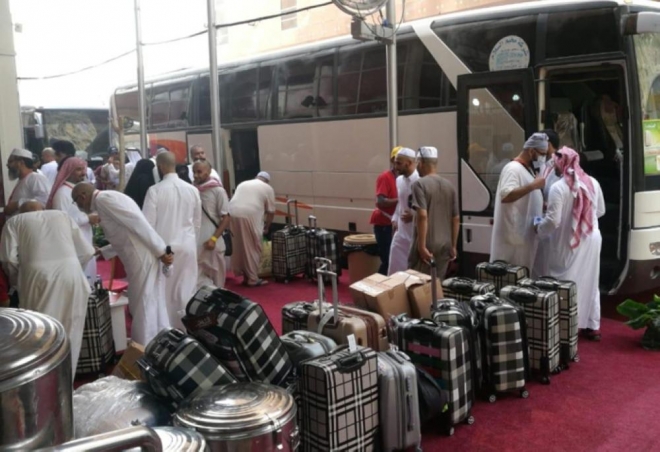 JEDDAH — Pilgrims started leaving the holy city of Makkah after performing the farewell tawaf, the last ritual of Haj, on Thursday evening. Several buses, carrying the pilgrims, started leaving for Madinah to visit the Prophet’s Mosque.

The first Haj flight from the Haj terminal of King Abdulaziz International Airport, Jeddah will take off on Friday morning. Essam Bin Fuad Noor, director general of the airport, said that all arrangements have been completed for the departure of pilgrims.

More than 13,000 staffers, representing 27 government and private agencies and departments, have been deployed to complete the travel procedures and extending various services for the pilgrims.

Noor said that more than one million pilgrims will leave the Kingdom through the Jeddah airport, of which about half a million will return within a week. The last flight will depart on Muharram 15. Pilgrims who did not visit the Prophet’s Mosque will return only after completion of the visit.

Many pilgrims expressed happiness over the completion of the pilgrimage in ease and comfort. They thanked the Saudi authorities for the smooth conduct of a hassle-free Haj, especially the meticulously arranged crowd management system at the Jamarat.

Speaking to Saudi Gazette, Mohammed Noor Rahman Sheikh, consul general of India, said that the overall pilgrims’ movement part was much better, smoother and timely comparing with the previous years.

“The crowd control mechanism at Jamarat was excellent and the pilgrims could perform the stoning ritual comfortably despite extreme temperatures. The Indian Haj mission received small number of complaints this time and that were mainly related to distribution of precooked meals by some muallims in their Mina tents, and the mission intervened quickly to sort out the issue,” he said.

Sheikh said that out of 175,000 pilgrims, only 7,000 stayed back in Mina to perform the stoning ritual on Friday, the last day of Haj. Around 113,000 pilgrims are staying in Aziziyah, which is a few kilometers away from Mina, and this also contributed to their smooth movement.