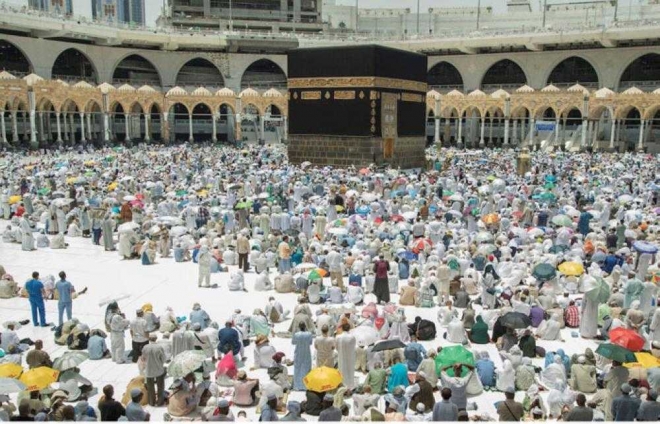 MAKKAH — The Haj of 2018 has been a resounding success. The pilgrimage is practically over now with pilgrims leaving Mina to Makkah on Friday to pray Jumaa in the Grand Mosque, do tawaf Al-Wadaa (farewell circumambulation) around the Kaaba and get ready either to depart for their respective homes or go to Madinah to pay homage to Prophet Muhammad (peace be upon him) and pray at his mosque.

Mina, which was bustling with pilgrims in their white Ihrams for five days, looked a deserted city with thousands of tents being demolished to be reconstructed next year.

Emir of Makkah Prince Khaled Al-Faisal, chairman of the Central Haj Committee, announced the success of the pilgrimage and said the Kingdom would get ready to receive about 30 million Umrah pilgrims and five million Haj pilgrims in the near future.

According to official figures, as many as 287,000 men and women employees of 19 government departments provided services to the pilgrims which enabled them do their rites in ease, peace and comfort.

As many as 103,000 pilgrims from Malaysia and Indonesia have benefited from the "Makkah Road" initiative under which they completed all their passport procedures right at their homes.

The Saudi diplomatic and consular missions abroad had issued more than 1.7 million Haj visas to Muslims from 165 countries including 5,400 who were the guests of the Custodian of the Two Holy Mosques King Salman.

More than 250,000 military personnel and security forces worked day and night to ensure security and safety for the 2.4 million pilgrims.

Minister of Health Tawfiq Al-Rabiah announced that there were no epidemic or contagious diseases among the pilgrims.

He said the ministry had provided 25 general hospitals and155 health centers in Makkah and the holy sites in addition to a team of more than 31,000 medical cadres to extend medical care to the guests of God.

According to the ministry, 36 open-heart surgeries, 579 catheter operations and 2,056 kidney dialysis were conducted during the Haj days.

The ministry said there were 12 delivery cases in the hospitals of Makkah and the holy sites including Waddah, a Jordanian baby boy who was the first to be born in the Jabal Al-Rahma hospital in Arafat.

The emergency hospital in Mina has in the past five days provided medical and ambulance services to a total of 8,396 pilgrims.

The Islamic Development Bank, which is supervising the Kingdom's Sacrificial Meat Project, said around 908,000 animals were slaughtered since the Eid Al-Adha day on Tuesday. Bandar Hajjar, president of IDB, said that the process of slaughtering of sacrificial animals have been completed by Friday evening. At eight slaughterhouses in Muaissem more than 600,000 heads of sheep and 308,000 cattle were slaughtered. The meat is being distributed among the poor people of the Haram area as well as among the charity societies across the Kingdom. The refrigerated meat will be transported to 27 countries to distribute among poor Muslims, he added.

Meanwhile, Essam bin Fouad Noor, director of King Abdulaziz International Airport (KAIA) said the airport is ready for the departure of about a million pilgrims in the coming few days.

He said the Haj terminal, consisting of 14 lounges, would be made into a departure lounge only so as to facilitate the departing procedures.