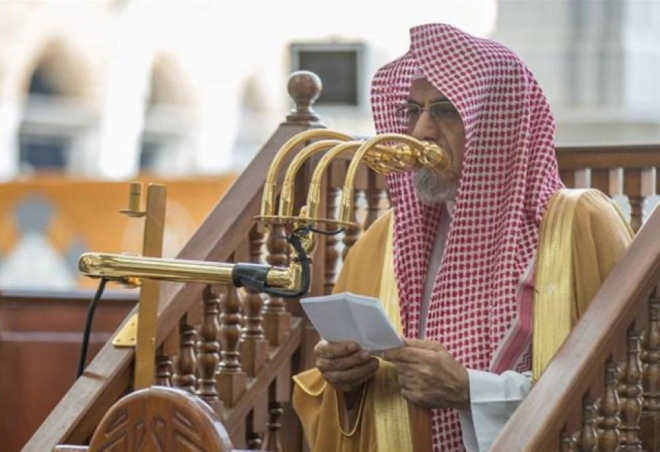 MAKKAH — Imams of the Grand Mosque in Makkah and the Prophet’s Mosque in Madinah urged Haj pilgrims to maintain the spiritual takeaway of Haj throughout the remainder of their life. More than two million worshippers, mostly pilgrims, performed Juma prayer at the Two Holy Mosques on the last day of the pilgrimage.

In his Friday sermon, Sheikh Saleh Bin Humaid, imam of the Grand Mosque, said that the most important fruit of Haj is acquiring piety and reshaping life accordingly. “All the activities of life, including work, eating, sleeping, travel, business and so on will be rewarded as true worship of God if they are accompanied by good intention of winning pleasure of God and doing good to fellow human beings,” he said.

All the floors and courtyards of the Grand Mosque were full of worshipers, and the rows of worshipers spilled over to the streets of the central Haram area.

In his sermon, Sheikh Abdullah Al-Buaijan, imam and khateeb of the Prophet’s Mosque, welcomed the pilgrims who arrived to greet the Prophet (peace be upon him) after completing their rituals of Haj. “Allah Almighty has honored you with enabling to perform the pilgrimage, which is the fifth pillar of Islam, in a much easier and comfortable way.”

He emphasized that sincerity in words and deeds is the real essence of one’s faith and that the pilgrims should embrace the spirit of unity and solidarity with fellow Muslims that they had experienced during Haj in the rest of their life. “Haj is a sermon for those who remember and obeying God, and it is a source of piety. Any worship, which does not make the faithful closer to God and not keeping them away from sins, is an adulterated and worthless one,” he cautioned the pilgrims.


⇐ Previous:
Pilgrims leave Makkah for Madinah to visit Prophet’s Mosque
Next: ⇒
Haj is over with pilgrims getting ready to depart