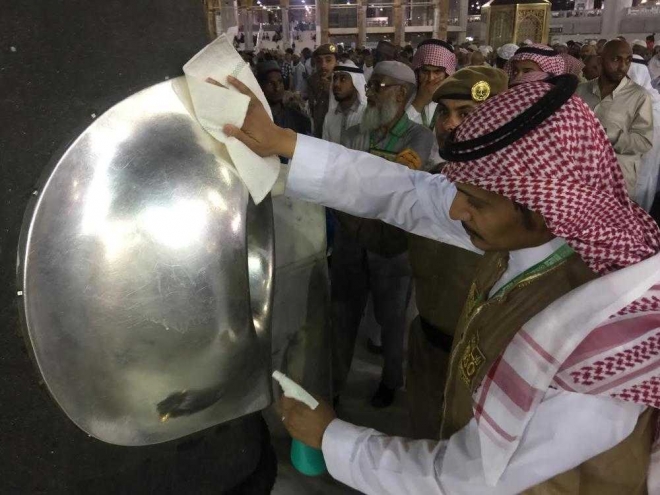 MAKKAH — The area around the holy Kaaba is sterilized, cleaned and perfumed after every Adhan (prayer call) and before prayer, according to the Presidency of the Affairs of the Two Holy Mosques.

"Before each prayer every day, the Hijr Ismail, the entire area around the Kaaba and Al-Multazim (the area between the Black Stone and the Kaaba door) are sterilized by disinfectants, cleaned and perfumed," said Hassan Al-Zowiahri of the presidency.

He said the cleaning operation starts at Hijr Ismail, goes on to the whole area surrounding the Kaaba and then continues to Al-Multazim.

Zowaihri said the cleaning is done in two phases: the first is the sterilization of the mataf area, the Al-Multazim, Al-Rukn Al-Yamani (the right-hand corner) and the Black Stone and the second is perfuming with special perfume.

"There is a special perfume especially made for the Black Stone and the cleaning time before each prayer is 15 minutes," he explained.

He said before the start of the cleaning operation, the area would be emptied from the people who are doing tawaf and these who are praying by the Haram security forces.

According to Zowaihri, the vacuuming first and then the cleaning begins.

"The cleaning of the Grand Mosque is a process which is continuing for the entire day and night," he said.